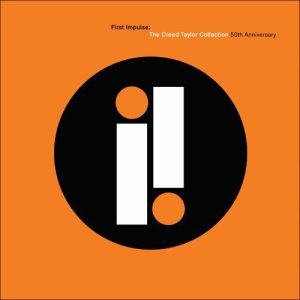 UPDATE 3/22: You can now order this box set through Hip-o Select here.

We have some more info on the aforementioned Impulse! Records box set coming from Universal in April, thanks to our friends at Record Racks.

As previously mentioned, First Impulse: The Creed Taylor Collection 50th Anniversary box is going to compile the label's first six LPs by the likes of Kai Winding, Gil Evans, Ray Charles and John Coltrane, all of which were produced by label founder Taylor, along with rare and unreleased material across four discs. We now have the track list for your perusal.

The set is in mostly chronological order across the first three discs; the Kai Winding LPs, the first and third for the label, are combined onto one disc, with the rest following chronologically. The fourth disc collects the mono single version of Ray Charles' "One Mint Julep," a Gil Evans bonus track, all of the alternate takes from Coltrane's Africa/Brass sessions (previously released as a 1974 LP and a 1995 deluxe set) and three previously unreleased rehearsal takes of Coltrane's. All in all, not a bad set for jazz fans.

The box is set for release April 19. Hit the jump for the full rundown!