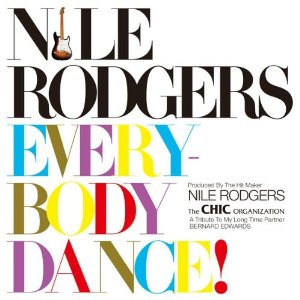 As a celebration of being cancer-free, CHIC guitarist and producer extraordinaire Nile Rodgers announced today that Warner Japan was releasing a new compilation of material that spans both his work with the legendary disco band and in the producer's chair.

Everybody Dance!, billed as "a tribute to my longtime partner Bernard Edwards" on the front cover (it's approaching the 15th anniversary of the bassist's death), is a two-disc set full of hits, one new track - and one absolute oddity. Disc 1, the "CHIC side," collects the biggest hits and favorite tracks from every CHIC record, including "Good Times," "Le Freak," "I Want Your Love," "My Feet Keep Dancing" and more. (One would expect the quality to be relatively pristine, with much of this material remastered for Rhino France's excellent CHIC box from last year.) Disc 2 is the "producer side," featuring major hits from the usual suspects (Madonna, Sister Sledge, David Bowie, Diana Ross, Duran Duran) and a few obscure Rodgers-produced singles for Thompson Twins, Al Jarreau and the Coming to America soundtrack. One new track, "I Wanna Dance," is present, featuring Rodgers with Kool & The Gang.

It looks to be an excellent set - but there's one very weird occurrence in the track list. The penultimate track on Disc 2 is David Bowie and Mick Jagger's cover of "Dancing in the Street" from 1985, a track that was not primarily produced by Rodgers, but British hitmakers Clive Langer and Alan Winstanley. Rodgers is listed on the original single under "additional production," but this author doesn't consider it a full Rodgers work - and seeing as how it was licensed from another label, it only costs Warner more money.

Regardless, Everybody Dance! should be a hit when it's released in Japan on April 6. Hit the jump to check out the track list.