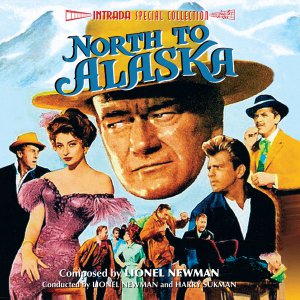 Fans of Hugo Friedhofer and Alfred Newman have had much to applaud lately, thanks to Kritzerland’s recent reissues of Friedhofer’s One Eyed Jacks and Newman’s The Counterfeit Traitor. Our friends at Intrada last night delivered more for fans of those Golden Age titans with the release of the scores to Two Flags West (1950) and North to Alaska (1960) on one CD; Friedhofer composed the former while Alfred Newman conducted. For the latter, Alfred’s brother Lionel handled scoring duties and also shared the conducting chores with Harry Sukman.

The Civil War-era western Two Flags West was helmed by Robert Wise (The Sound of Music, West Side Story). Wise directed a cast including Joseph Cotten, Jeff Chandler, Linda Darnell and Cornel Wilde. Ten cues have been remastered from 20th Century Fox’s original stereo tapes.  Another ten cues from 1960’s North to Alaska round out the CD, also from the original stereo tapes. This Henry Hathaway (True Grit, How the West Was Won) film starred John Wayne and Stewart Granger, and Johnny Horton sang Lionel Newman’s title theme. The Horton vocal version has been included here. Julie Kirgo contributes liner notes. Both soundtracks are appearing for the first time.

This limited edition of 1,000 copies quickly sold out, and as of this writing on Tuesday, April 5 is unavailable from Intrada and Screen Archives. Copies may be still be found from other dealers.

Have no fear, though, film score fans. Intrada also announced a release of Michael Small’s 1984 score to Kidco in a 1,000 copy edition that is still available. This little-known Ronald F. Maxwell comedy featured Scott Schwartz and Tristine Skyler, and Small (Marathon Man, The Parallax View) integrated the sound of Americana and the great outdoors into his orchestral score, with added color from guitars and synthesizers. The 19 tracks, including one bonus alternate cue, have been remastered from the original tapes at 20th Century Fox. Kidco is a world premiere release.

Nick Redman, who also contributed liner notes to Kritzerland’s edition of One Eyed Jacks, produced both releases for Intrada. Kidco is still available directly from the label. Hit the jump for track listings and discographical information!