"Trouper" to Get More Super on New ABBA Deluxe Set 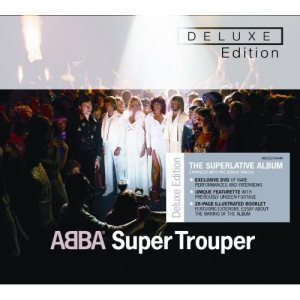 The ABBA catalogue has seen plenty of expansions, compilations and catalogue activity (see this Back Tracks post for the proof) over the years, and we can now add one more to the list: Super Trouper, the band's penultimate album, is being reissued yet again with a bonus DVD of unreleased goodies.

Super Trouper was the group's penultimate album, a conscious attempt to distance the group from the increasingly-hated genre of disco. The more straightforward pop stylings were still as successful with audiences, though, and the album went to No. 1 in seven different countries (it peaked at No. 17 in America). The bouncy, danceable title track and the mournful, prescient break-up ballad "The Winner Takes It All" both soared to the top of the U.K. charts, but only the latter went Top 10 in the States. (The track topped Billboard's Adult Contemporary chart, while a maxi-single of "Lay All Your Love on Me"/"Super Trouper"/"On and On and On" topped the U.S. dance chart.)

In keeping with the recent formula of ABBA deluxe editions, the expanded Super Trouper features the original album with five bonus tracks mostly available from previous reissues (the sole new offering is the extended video version of "On and On and On," presented for the first time in stereo), coupled with a DVD full of vault material. Live television performances, music videos and vintage commercials are all included, along with a long-unreleased vintage documentary (Words and Music) and a never-before-seen one, Somewhere in the Crowd There's You, which focuses on the night the band, along with two local circuses, shot the album sleeve and footage for several of the music videos.

The set is due out in the U.K. on May 9 and two weeks later in the U.S. on May 24 (Amazon is reporting a May 17 release date). Hit the jump for the track list and all discographical information! (Thanks as always to MusicTAP for confirming the date.)