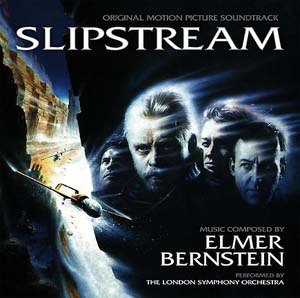 Anyone who thinks the world of soundtrack reissues is a simple one hasn’t been keeping up with the tempest brewing over Perseverance Records. The indie soundtrack label is coming under heavy fire for what many perceive as an improperly licensed release of Elmer Bernstein’s score to Slipstream.

Interestingly, the charge is being led not by fans but by another label head: Film Score Monthly’s Lukas Kendall, who posted on his label’s message board a pair of messages pulling the curtain back on charges that the long-desired soundtrack was not properly licensed.

Kendall first explained the permissions necessary to release a film soundtrack: clearances from the film company for album rights, permission to utilize the master recordings and publishing rights. Typically, these all usually lie within one film company; however, Bernstein owned his own publishing to Slipstream, while the production company owned album rights and the master tapes. Kendall’s accusation – which has apparently manifested into a cease and desist from Bernstein’s estate after he tipped them off to potential wrongdoing – is that Perseverance merely secured publishing rights and acquired the master tapes (which, along with much of the composer’s work, resides in the library at the University of Southern California) without securing the other necessary rights.

Perseverance head Robin Esterhammer soon took to the FSM boards to tell his side of the story: the assumed owners of Slipstream, U.K.-based Entertainment Films informed him they did not have the rights to the title, while Bernstein’s estate claimed both publishing and master rights. When Esterhammer contacted Bernstein’s estate after being made aware of Kendall’s declaration of a cease and desist, he was informed of “two contradicting paragraphs in the licensing agreement that we both should have been aware of.”

Esterhammer’s argument is weakened somewhat by his admission that Kendall “was right in one point, however: It is not enough to put a © and “Released Under License From Elmer Bernstein Enterprises Inc”. I guess I should have put a (P), as well.” (A similar omission occurred in a recent reissue of Red Sonja.) But something tells me the dust hasn’t settled on this one just yet. Granted, it is unusual that a smaller label like Perseverance achieved what Intrada or FSM were repeatedly denied – the rights to release the score to Slipstream – but I have my doubts that the issue is just as clear-cut; it is certainly colored by some sort of bad blood between Kendall and Esterhammer (cease and desist talks began after Kendall chose not to help Esterhammer secure some releases from Warner Bros., citing bad conscience in the wake of what he believed was essentially a bootleg of Slipstream), and, since this is the music industry, there are usually more facets to the story behind closed doors or quieted by legal contracts.

So what’s the takeaway here? At the very least, two things, both of which we already knew: first, that the hoops through which one has to jump to make reissues of any kind happen are pretty impressive; second, that the sanctity of the business rests largely on doing everything properly on the legal side. However, what this means for Peseverance in particular – and indie soundtrack labels in general – is still something for the future.