School's Out, Alice Cooper Box is In 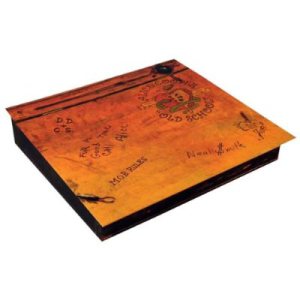 We've got less than a month until the new Alice Cooper mega box set starts shipping, so now's as good a time as any to take a look at the track list for the set.

As previously reported, Old School 1964-1974 encompasses four CDs and a vinyl LP and single, each of which chronicles Vincent Furnier's time as the frontman for Alice Cooper, the band which gave him his stage name. (Beginning in 1975 with Welcome to My Nightmare, Cooper's albums were largely solo efforts.) Only about three of these tracks have been released before - one by Furnier's high school band The Spiders (which also featured Alice Cooper members Glen Buxton, Michael Bruce and Dennis Dunaway), and a reproduced vinyl single by The Nazz, which was The Spiders' line-up with drummer Neal Smith. (The Nazz would later change their name to Alice Cooper.)

The majority of the CDs consist of vintage live material (chief among them a show from the Killer tour in 1971, also reproduced on vinyl), demos, outtakes and radio ads. There's also a bonus CD of Cooper's memories of the band's early days and a 64-page hardcover yearbook, packed with rare photos and other swag in a desk-shaped box.

You can enroll with Old School through Alice's official website (orders ship June 20) and hit the jump for discographical info.

Disc 3: Alice Cooper - In His Own Words

Disc 1, Track 1 released on Santa Cruz single SCR-10003, 1966
All other tracks previously unreleased except where noted