A Compilation to Leave You Speechless 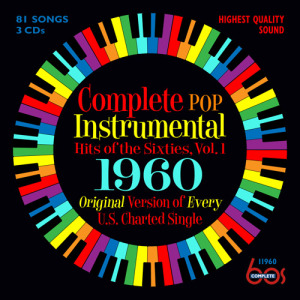 Here at The Second Disc, it's always about the music. The team at Eric Records takes this mission seriously, too: its newest release provides three discs of nothing but music, with nary a lyric to be found.

Complete Pop Instrumental Hits of the Sixties, Volume 1 collates, for the first time on three CDs, every instrumental track that hit the Billboard Hot 100 in 1960. Some of them are chartbusters that we all know and love - Percy Faith's "Theme from 'A Summer Place'," The Ventures' "Walk - Don't Run" - while others are rarities by artists relegated to the annals of history, from Duane Eddy and Bill Haley and His Comets to Bobby Darin and Santo and Johnny.

All 81 tracks are remastered from the original source material and, wherever possible, presented in stereo. (This led to at least one track, "Kommotion" by Duane Eddy and The Rebels, presented in stereo on CD for the first time anywhere; another 15 tracks also make their debut on the format.) There are also a few bonus tracks, including some songs that charted in 1960 but were released the year before, and both mono and stereo versions of the theme to the long-running series 77 Sunset Strip. The set is augmented by a 28-page booklet featuring biographical info on each artist and track-by-track release information.

All in all, this looks like it could be a really fun set - and hopefully the first in a series! Order the set here (the set's out June 21, but those who order it from the label will see their orders shipping around Monday) and look at the track list after the jump.