Reissue Theory: The Smiths, “The Queen is Dead”

Welcome to another installment of Reissue Theory, where we take a look at notable albums and the reissues they may someday see. Has the world changed or have we changed? Whatever the answer, The Smiths’ The Queen is Dead, which recently hit the quarter-century mark, is a classic of British rock – and, like all of The Smiths’ albums, it would make a prime candidate for a deluxe reissue. 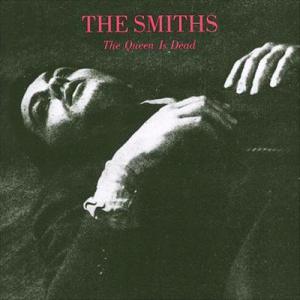 It wouldn’t be enough to someday see remasters of The Smiths’ core discography (the four studio albums, the Rank live album, and Hatful of Hollow and The World Won’t Listen/Louder Than Bombs compilations). It would be a pleasure to see all of them expanded in some way, shape or form, as a tonic to the consistent compilations that have hung around record shops since the band’s untimely breakup in 1987.

We’ve certainly talked about such ideas before, but no theoretical expansion would excite me more than one for The Queen is Dead, the band’s penultimate and arguably most beloved album. It’s one of only three albums to have gone gold in both the U.K. and the U.S., and features some of Morrissey and Johnny Marr’s most solid songwriting together. And, as luck should have it, June 16 marked the album’s 25th anniversary of release in its native country.

So meet us at the cemetry gates (or after the jump, whichever you prefer) for a trip down memory lane with The Queen is Dead.

The Queen is Dead could have easily been a tough album to record. The Smiths were engaged in some entanglements with the brass at their label, Rough Trade, and had recently finished a whirlwind tour for the lauded Meat is Murder one year earlier. Instead, they joined up in London’s RAK Studios and Jacobs Studios in Farnham, armed with some half-written songs from concert soundchecks and penning some new ones along the way. The first track to click from the beginning of those sessions was “The Boy with the Thorn in His Side,” the demo of which was mastered and pressed as a single in the fall of 1985. It only managed a Top 30 showing, even with the band’s first official video clip promoting the song. (The video was universally derided by fans as a sell-out move; the band had previously strongly resisted making videos, opting instead for appearances on Top of the Pops.)

Together, Morrissey and Marr produced some of their most acerbic (“Frankly, Mr Shankly,” the title track), upbeat (“Cemetry Gates”), witty (“Bigmouth Strikes Again,” “Vicar in a Tutu”) and saddest (“I Know It’s Over,” “There is a Light That Never Goes Out”) work for the album. (Indeed, the only ones who disagree that The Queen is Dead is the band’s best work is Morrissey and Marr themselves, who opt for the final album, 1987’s Strangeways, Here We Come.)

But while the sessions that closed out 1985 were full of life and energy (owing to Morrissey and Marr assuming production alongside longtime engineer Stephen Street), the first half of the next year was marked by roadblocks. Bassist Andy Rourke’s heroin addiction was getting worse, to the point where Rourke found a terse note from Morrissey on his car windshield saying, “Andy, you have left The Smiths.” Parallel to that, Marr bought ex-Aztec Camera guitarist Craig Gannon into the band; Gannon denies being picked as Rourke’s replacement, but it didn’t matter anyway, as within weeks Andy was rehired into the band, making The Smiths a temporary quintet. (It was during this time that they recorded two of this author’s favorite Smiths singles, “Panic” and “Ask,” with former Smiths producer John Porter. Both were Top 20 singles in the latter half of 1986.)

Eventually, The Smiths and Rough Trade settled their differences enough to release The Queen is Dead, where it was met with widespread acclaim from the music press. And why the hell not? It’s a ripper of an album from start to finish, and its influence was wildly obvious within the next decade, as a host of British bands borrowed from The Queen‘s sound and created a whole genre named Britpop out of it. As Moz himself had etched into the runout grooves of the “Bigmouth Strikes Again” singles, talent borrows – genius steals.

There would certainly be a great deal of material worth anthologizing on a deluxe package for The Queen is Dead. Several session outtakes were recently unearthed on a bootleg set earlier this year, and there were as always plenty of non-LP B-sides to feature. In particular, a deluxe set could house some of the specific mixes and edits that have been infrequently or never pressed on CD, such as the single versions of “The Boy with the Thorn in His Side” and “Ask” and the “medley” mix of B-sides “Rubber Ring” and “Asleep,” as only heard on the original 12″ single of “Thorn.” There are some other known bits that would make for fascinating inclusion on a bonus disc, namely an alternate mix of “Bigmouth Strikes Again” featuring a backing vocal by Kirsty MacColl that Marr deemed too weird for inclusion, provoking Morrissey to record sped-up backing vocals himself (under the pseudonym Ann Coates).

And finally, we’d round out the set with an expanded version of the band’s performance at Kilburn’s National Ballroom on October 23, 1986. This set, featuring Craig Gannon in the lineup and plenty of tracks from The Queen is Dead, was edited and released as Rank in 1988, after the band had ceased to exist.

The Smiths, The Queen is Dead: 25th Anniversary Edition (Rhino)

All other tracks previously unreleased