The Smiths have been apart far longer than they were together in the mid-1980s, making the Manchester quartet today less of a band and more of an idea. It's interesting to see how a new deluxe edition of The Queen Is Dead (Warner Bros. 0190295783372), the group's most lauded album, interprets that thesis through its content and packaging. While the band may have made for a mere cult sensation in America, but in their native England (where success was fleeting but far more consistent), they

END_OF_DOCUMENT_TOKEN_TO_BE_REPLACED

The Smiths' The Queen is Dead - a towering album of '80s British rock and arguably the definitive statement by the Manchester band - gets the deluxe, expanded treatment from Rhino.  This reissue has been approved by Morrissey, who offered in a statement, "You cannot continue to record and simply hope that your audience will approve, or that average critics will approve, or that radio will approve. You progress only when you wonder if an abnormally scientific genius would approve-and this is the

END_OF_DOCUMENT_TOKEN_TO_BE_REPLACED

The Smiths' The Queen is Dead--a towering album of '80s British rock and arguably the definitive statement by the Manchester band--will be reissued and expanded October 20. Produced by frontman Morrissey and guitarist Johnny Marr with assistance from engineer Stephen Street, The Queen is Dead has become quintessential Smiths: packed with biting, witty lyrics and catchy, densely layered instrumental hooks (thanks not only to Marr but bassist Andy Rourke and drummer Mike Joyce). While Morrissey

END_OF_DOCUMENT_TOKEN_TO_BE_REPLACED

Every announcement of archival material by The Smiths is met (whether or not it deserves it) with those famous lyrics from "Paint a Vulgar Picture" as a reaction: "Re-issue, re-package, re-package / Re-evaluate the songs / Double-pack with a photograph / Extra track and a tacky badge..." Well, get those lyric cards ready, because Morrissey has recently announced a 45 RPM single from Warner Music U.K. featuring previously unissued versions of "The Boy with the Thorn in His Side" and "Rubber

END_OF_DOCUMENT_TOKEN_TO_BE_REPLACED

UPDATE (6/3): Available today, Salvo has expanded and reissued three more Sandie Shaw LPs. They are 1968's The Sandie Shaw Supplement, featuring covers of The Rolling Stones ("(I Can't Get No) Satisfaction") and Simon & Garfunkel ("Scarborough Fair"); the self-produced cult hit Reviewing the Situation (1969) and 1988's Hello Angel, her first LP for Rough Trade and featuring a heap of single-only material with labelmates and fans The Smiths. ORIGINAL POST (4/8/2013): British pop chanteuse

END_OF_DOCUMENT_TOKEN_TO_BE_REPLACED

It's rare when musicians do any amount of press on reissues, usually because they've got bigger things to worry about or are deceased. So the notion that some of the people behind three major catalogue campaigns have all had something notable to say in the past few days is certainly worth the attention of any catalogue fan: Johnny Marr gave an extensive interview with The Onion's AV Club about his memories of The Smiths as filtered through the assemblage and release of Rhino's The Smiths

END_OF_DOCUMENT_TOKEN_TO_BE_REPLACED

Johnny Cash, Bootleg IV: The Soul of Truth (Columbia/Legacy) Three complete gospel albums - one of which was never released - and a heap of unreleased material make this one to look out for if you like The Man in Black at his sacred best. Morrissey, Viva Hate: Deluxe Edition (Liberty/EMI) If you can call it that, an expanded edition of Moz's debut album, remastered with one bonus track, one edited track and one excised track. Elvis Costello & The Imposters, The Return of the

END_OF_DOCUMENT_TOKEN_TO_BE_REPLACED

Ready your credit cards! Rhino has the super-exhaustive Smiths box set ready for order in the United States. As previously reported, the set is available in three distinct formats: a box set of the band's eight main albums on CD, remastered by Smiths guitarist Johnny Marr and Frank Arkwright; a box of those albums on 12 vinyl LPs and a mega-box - limited to 4,000 copies worldwide - featuring all the CDs and vinyl with 25 bonus 7" singles, art prints and The Complete Picture DVD. While it's not

END_OF_DOCUMENT_TOKEN_TO_BE_REPLACED

Happy Friday!  We’ve got some tidbits to tide you over till we return on Monday, with much, much more! If you’re eagerly awaiting that complete Smiths box set but are worried about the falling American dollar, worry no more!  Thanks to fine folks at MusicTAP for the heads-up that Rhino will be releasing The Smiths – Complete in the U.S. on October 18!  The American edition will be available in the same configurations as in the U.K.: a gigantic Limited Edition Super Deluxe Box set, a vinyl LP

END_OF_DOCUMENT_TOKEN_TO_BE_REPLACED

As we at The Second Disc HQ love to point out, Morrissey once set his scathing lyrical pen on record companies' propensity for reissues on The Smiths' "Paint a Vulgar Picture." Currently, he must be shitting bricks: Rhino U.K. is planning The Smiths - Complete, a box set compiling the influential band's entire discography, all newly remastered. Clever fans spotted the presence of the set on the label's site late last night (we have super-reader Dean H. to thank for hipping us to it), and our

END_OF_DOCUMENT_TOKEN_TO_BE_REPLACED 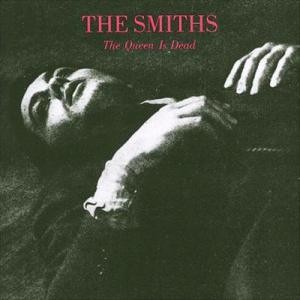 Welcome to another installment of Reissue Theory, where we take a look at notable albums and the reissues they may someday see. Has the world changed or have we changed? Whatever the answer, The Smiths' The Queen is Dead, which recently hit the quarter-century mark, is a classic of British rock - and, like all of The Smiths' albums, it would make a prime candidate for a deluxe reissue. It wouldn't be enough to someday see remasters of The Smiths' core discography (the four studio albums, the

END_OF_DOCUMENT_TOKEN_TO_BE_REPLACED

"Re-issue ! Re-package ! Re-package ! Re-evaluate the songs Double-pack with a photograph Extra track (and a tacky badge)" - "Paint a Vulgar Picture," The Smiths Sometimes one wonders why a band as listenable, influential and obsessed over as The Smiths doesn't get much in the way of back catalogue treatment. Outside of a few compilations (most recently 2008's The Sound of The Smiths) and a box set of reproduced singles, that's been more or less it; the albums haven't been repressed since

END_OF_DOCUMENT_TOKEN_TO_BE_REPLACED

One of the books devoured by this author over the Easter break was The Smiths: Songs That Saved Your Life by Simon Goddard. If you're a fan of The Smiths, are thinking about being a fan of The Smiths or just like '80s alt-rock in general, you would do well to add this to your bookshelf. It provides an in-depth account of every song released or recorded by the band in their too-brief career and covers Morrissey, Johnny Marr, Andy Rourke and Mike Joyce through prose that's both artistic and

END_OF_DOCUMENT_TOKEN_TO_BE_REPLACED

Today was the day that U.K. fans, elated from the grassroots success of making Rage Against the Machine's "Killing in the Name" the 2009 Christmas No. 1 single, attempted to make lightning strike twice with a campaign for The Smiths' immortal "How Soon is Now?" Call me a spoilsport, but I have my doubts that the campaign is going to make the same kind of headway. The "Killing in the Name" incident was just right-place, right-time and had suitable fire underneath it (people will buy a single so