After around 20 months at the helm of The Second Disc, I think I've finally stumbled over a reissue that feels...dare I say it...misguided. Not entirely misguided, mind you, but misguided enough that it took me far longer than anticipated to bang out some thoughts on the title at hand, to understand what it meant for all of us as collectors and enthusiasts of catalogue material. Not a total strikeout, but a hit that barely gets a runner to second base, when it should have been an out-of-the-park home run.

Nirvana's Nevermind (1991) was a game-changer on so many levels. Alongside two releases by fellow lauded Seattle bands Pearl Jam (Ten) and Soundgarden (Badmotorfinger), they instigated a sea change in music and popular culture forever. Not only did they turn the tide away from traditional pop albums entering the upper reaches of the Billboard 200, but in the wake of the publication's adoption of Nielsen SoundScan data for official chart placement, such diverse sounds became, temporarily, part of the mainstream (before the diversity ultimately burst the monoculture into tiny pieces, right as the Internet became mainstream).

The record was, at the time of release, estimated to sell 250,000 copies when all was said and done; the album in fact moved more than 10 million in the U.S. alone. Now, Nevermind is revisited by that music industry that was so undone in part by the album's success - an industry where a million copies sold of any record is now staggering. Predictably, it's being given the royal treatment, either as a double-disc deluxe edition (DGC/UMe B0015883-02) or a by-now-industry-standard 4-CD/1-DVD super-deluxe edition (DGC/UMe B0015885-00). By virtue of its artistic and commercial value, Nevermind certainly earns this status as a reissue. Was it necessary, though, doing it the way it was done?

You don't need me telling you what Nevermind means to popular culture. You don't even need me telling you what a quality album it is - although if it's been awhile since you listened, it might be to your advantage. All of Nirvana's three studio albums have their quirks - Bleach is tuneful but ragged, In Utero is fine-tuned to alienate you, but Nevermind takes that raw grunge energy and smooths it into something palatable without entirely sacrificing the noise or the songwriting craft. (It may not be their best album, but it's certainly the easiest gateway to their music.) And there are some damn fine songs on here, more than just the iconic "Smells Like Teen Spirit" or "Come As You Are." No praise or airplay for songs like "In Bloom," "Breed," "Drain You," "Polly" or "On a Plain" could accurately convey what a genuine pleasure they are to hear, even after 20 years of countless imitations and variations.

No, what you need to know is the answer to that $64,000 question that comes with every deluxe reissue: is this bonus material worth it? Like too many other, similar packages, the answer is yes...and no. Fortunately, most of the fattiest material is saved for the largest edition: Butch Vig's rougher-hewn "Devonshire" mixes of the original album and a CD and DVD of the band's Halloween 1991 gig at Seattle's Paramount Theatre. The show is certainly of worthwhile quality as a standalone release (and it has indeed been put out on DVD on its own), but it can't really match the significance or intensity of the band's 1992 Reading Festival gig. As for the Vig mixes, it's not that they're better or worse than Andy Wallace's polished final version of the album - it's that they're not terribly different. Only serious A/B listening will bring out the differences between the two. 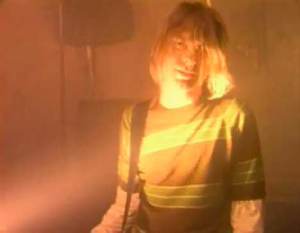 That brings us down to the heart of the bonus material: all the original B-sides from the Nevermind era, appended to the first disc, and a bonus disc of early recordings leading up to the actual Nevermind sessions. Having the B-sides in one place (very few of them appeared on outtakes compilation Incesticide) is certainly a boon for hardcore fans not interested in scouring the globe for CD singles. And the eight Smart Studio session tracks, recorded with then-new drummer Dave Grohl and producer Butch Vig with the intent of attracting major label interest, are well-crafted, with a bit more detectable edge than the Devonshire mixes, making them worthy listens over time.

But those eight tracks are augmented with eight of the worst bits to appear not only on this package, but on any deluxe reissue in recent memory. I'm talking about the "boombox sessions," in which rehearsals of "Smells Like Teen Spirit," "Come As You Are," the famed outtake "Verse Chorus Verse" and others were recorded on a cassette deck and, for some reason, transferred to CD. Yes, fidelity is a major factor in the uselessness of these tracks; it's very hard to tell the nuances of what's going on in each track, which is to be expected from a single-miked cassette dub.

The deeper problem, likely, is that this isn't the first time this sort of low-res material has been passed along to Nirvana fans. The With the Lights Out box set was overstuffed with such dull bits from a vault that wasn't teeming with nearly as many quality treasures as previously hoped. Fans might deserve better, but they're not going to get better, because it simply doesn't exist.

A reissue of Nevermind is certainly a big deal and should be treated as such. It's one of the last American records that most will unanimously agree deserves that kind of reissue red carpet treatment. But it should not have been excessive, as the super-deluxe box set can be. It doesn't fit the band's image. Nor should it have been skimped upon, as with the deluxe edition (not only in content but packaging - that album cover screams to be sheathed in one of Universal's Deluxe Edition slipcases, not merely fit into a digipak with a very plain though photo-heavy book of liner notes). A happy medium could enable audiences to enjoy everything about these sets, the way it should be, without feeling stupid or contagious.