Mumford & Sons Go Back to “The Cave” for Expanded Album 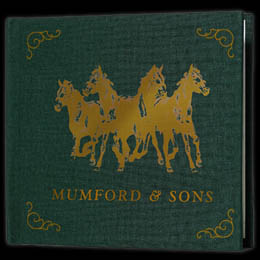 In case you’ve been living under a rock for the past year or so, Mumford & Sons isn’t the name of a trendy country boutique. It’s a rather great, roots-oriented band turning out some of the best, harmonically dense Americana-tinged rock on the scene right now. (Naturally, they’re not from around these parts, calling West London their home.)

In the year since Mumford & Sons’ Sigh No More was released in the U.S., the quartet’s songs, namely “Little Lion Man” and “The Cave,” have become surprising crossover hits. Constant touring and promotion on television helped the album peak at No. 2; the band particularly enjoyed a 99% sales jump after performing on the Grammy Awards alongside The Avett Brothers and a surprising upstart named Bob Dylan. (The band received nominations for Best Rock Song and Best New Artist, too.)

On October 25, as the band reconvenes in the studio for their second album, their U.S. label Glassnote will release a three-disc expanded edition of the record, featuring a host of extras. (This package was released last year in their native U.K. by Island Records.) In addition to the album and one bonus track, “Hold On to What You Believe,” a bonus CD includes a live show on the band’s U.K. tour, and a DVD features a three-part documentary about the band. The set will also come in a faux-leather case with a 22-page booklet.

The deluxe Sigh No More – one of the first deluxe editions of recent records you’ll be spotting for the fourth quarter (but assuredly not the last) – can be pre-ordered here. The track list is after the jump.