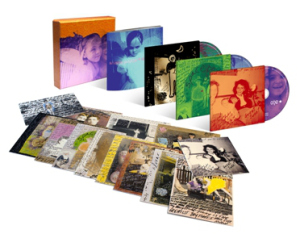 Anyone worried that Billy Corgan's muse would take him away from the long-promised expanded reissues of The Smashing Pumpkins' catalogue can breathe a sigh of relief. The first two entries in the reissue campaign - 2 CD/1 DVD editions of Gish (1991) and Siamese Dream (1993) - have been announced for a November 28 release domestically (December 5 for the rest of the world).

These albums - produced by Butch Vig and remastered by Bob Ludwig - are the first in a lengthy salvo of reissues promised by EMI through 2013. Featuring new interviews with frontman Corgan conducted by journalist David Wild and bonus material curated by Corgan, the packages follow the tradition of deluxe editions by David Bowie and Duran Duran, with lift-top boxes holding the three discs and additional artwork.

As for bonus material, Gish and Siamese Dream boast a healthy amount of unreleased demos and session material. (Gish uses some already-released material, featuring new Butch Vig-commissioned mixes of some single and B-side tracks, including the band's original version of "Tristessa" released by Sub Pop Records, but most of the B-sides are likely being saved for an expanded version of Pisces Iscariot, the band's original B-sides-and-rarities set.) The sets will each come with newly-released vintage live shows on DVD, both recorded at Chicago's Metro club and featuring new introductions from club owner Joe Shanahan.

Hit the jump for the full scoop on track lists for each set!