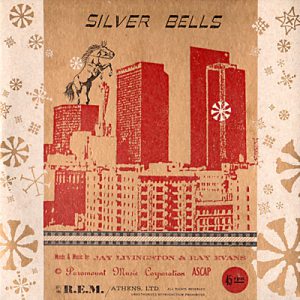 Welcome to another installment of Reissue Theory, where we focus on notable albums and the reissues they may someday see. It's the most wonderful time of the year, as you likely know, and we're celebrating with a recently-departed group of rock legends who made a few nights not-so-silent with a long running assortment of Christmas-oriented giveaways.

Not too long ago, I took part in a lively chat with my fellow Popblerd! writers/occasional co-podcasters Mike Heyliger and Zack Stiegler about various covers of Darlene Love's classic "Christmas (Baby Please Come Home)." (Indeed, as the chat indicates, my favorite is the U2 version. Fire away in the comments!) It was a total surprise to discover that R.E.M. covered the song for what ultimately seems to be their last Christmas fan club single, with vocals from bassist Mike Mills instead of lead singer Michael Stipe.

Indeed, that led to a pretty predictable trip down the rabbit hole to remember just how much interesting stuff R.E.M. put out solely for their fan club. I think you can guess where this is going: a Reissue Theory in which Athens, Georgia's favorite sons make with the holly and the jolly.

When R.E.M. made their transition to major-label act, signing with Warner Bros. from I.R.S. Records in 1988, they had the idea to release, as a gift to fans, a special, limited-edition single for the holidays. Typically, there would be a cover of a Christmas tune on one side (usually a classic carol, although there were some originals in the mix, along with covers of songs by Slade, The Beatles, Big Star and Vince Guaraldi). The other side would typically feature an unrelated cover or some other bonus.

While a vast majority of the singles were released on vinyl, some were released on other formats. 1997's gift, for instance, was a VHS consisting of two performances from Washington, D.C.'s Tibetan Freedom Concert, featuring collaborations between R.E.M. and Radiohead, and most thereafter were either released on CD or DVD. (A notable exception: 2000's blue-vinyl 45, featuring a take on The Beatles' "Christmas Time is Here Again" and two original songs.) From 1995 to 1999, in 2001, from 2003 to 2006 and once more in 2008, none of the singles had any Christmas material at all, opting instead for otherwise-unavailable live material and the like.

There's already been one R.E.M. compilation this year - and while even I'm tempted to believe it won't be the last, even I can't imagine it'd ever come to a holiday album made from years of rarities. But 'tis the season, after all, so hit the jump for a look at how that might look, with some links to hear some of the tunes as well.