All Hail the “King of the Beats”: Mantronix Anthology Released 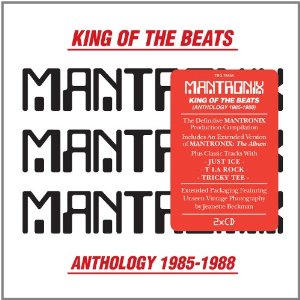 In the mid-1980s, as the New York rap scene blossomed and all sorts of rhythms were seeping into pop music, fewer dance acts were more exciting than Mantronix. Comprised of DJ/producer Kurtis Mantronik (nee el-Khaleel) and rapper MC Tee, Mantronix won club kids over with their sample-ready electronic sounds, combining processed beats, synthesized bass and turntable scratches to create something that sounded like the logical sonic progression from “Planet Rock” by Afrika Bambaataa and the Soul Sonic Force or Grandmaster Flash and The Furious Five’s “The Message.”

After the success of Billboard dance hit “Fresh is the Word” and the release of independent album Mantronix: The Album in 1985 (featuring tracks sampled or referenced by the likes of Beck and The Beastie Boys), Mantronix began to produce for other acts on their Sleeping Bag Records label before signing to Capitol in 1987 in one of the first seven-figure deals for a hip-hop act. MC Tee left the group for the Air Force in 1988, and Mantronik added rappers Bryce Wilson and DJ D. (and later singer Jade Trini in DJ D.’s place). Later singles like “Got to Have Your Love” were U.K. hits, but Mantronik left the music business for a long spell in 1991.

Traffic Entertainment Group, who expanded Mantronix: The Album in 2008 with a bonus disc of vintage mixes and edits, now presents King of the Beats 1985-1988, an overview of the band’s Sleeping Bag years, featuring 12″ mixes and album cuts from The Album and follow-up Music Madness (1986) as well as rare Mantronix productions for Just-Ice and T La Rock.

King of the Beats is out now and yours to order after the jump.