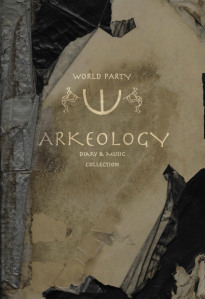 Arkeology collates 70 unreleased tracks, featuring B-sides, live cuts, demos, outtakes and other ephemera across five discs. The set will be uniquely packaged with a 142--page "Any Year Diary," featuring liner notes, rare photos and memorabilia from Wallinger's archives as well as a day calendar for fans to use however they please. “The reason it’s all inside an any-year diary is because I just got so sick of the CD packaging," Wallinger said in a statement. "I’m glad the whole CD format is dying, but I really didn’t want to put something out that was only digital.”

In two years with Mike Scott's band The Waterboys, Wallinger made a name for himself as a unique guitarist and arranger. After leaving The Waterboys, Wallinger's World Party cut their first record, 1986's Private Revolution in his home. While Wallinger is the only official member of the group, those early albums saw him collaborate with other members of The Waterboys (minus Scott) as well as a then-unknown Irish vocalist named Sinead O'Connor. World Party have enjoyed moderate but sustained chart success in the U.S., including the Top 40 hit "Ship of Fools" and the modern rock hits "Put the Message in the Box" and "Way Down Now." Wallinger's 1997 song "She's the One" was later covered by British pop icon Robbie Williams, whose version hit No. 1 in the U.K. and won several major British music awards.

The box will be released April 10 (Super Deluxe Edition reports the box is likely to be delayed in the U.K.) and can be ordered now. The as-yet un-annotated track list follows below.