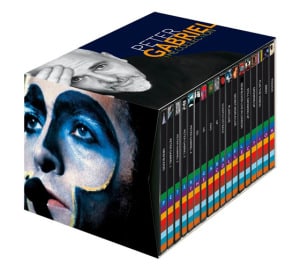 If you’re an Italian Peter Gabriel collector, or are looking for a way to get just about his entire solo discography in one fell swoop, you’ve met your match. Gabriel is partnering with Italian publications TV Sorrisi e Canzoni and Corriere della Sera to sell just about all of his studio albums to create a mega-box for fans.

Beginning with his latest project, last year’s orchestral New Blood album, 18 sets will be sold at kiosks, one per week, and will ultimately provide a semi-definitive album-by-album overview for the iconic performer. New Blood comes with a box to hold everything in, while the second in the series, his 1977 debut album, comes with “an unpublished book with an an exclusive interview and album by album story of Peter’s musical career.”

The definitiveness of the set is somewhat challenged by some gaps: the non-LP material from 1990’s Shaking the Tree compilation doesn’t show up, nor does Long Walk Home, the 2002 soundtrack from Rabbit-Proof Fence. (There’s also whatever might be found in the forthcoming So reissue, for which Gabriel’s site recently started a mailing list in anticipation of its September release.) Still, if you’re a collector looking for a fix, this might be your moment.

Hit the jump for a full line-up of what fans can add to the box.

Note: all catalogue numbers are based on the original U.K. releases.