The Bandcamp Friday train keeps rolling - a light in the darkness for music lovers if ever there was one! On March 20, as the COVID-19 pandemic was putting the world on pause, the indie music service waived their revenue share on all music and merch sold, allowing indie artists and labels a chance for some steadier income as concert tours began to halt. The event was a resounding success, and has been repeated on the first Fridays of May and June, with another on June 19 (a planned annual

END_OF_DOCUMENT_TOKEN_TO_BE_REPLACED

Last year, Peter Gabriel issued Rated PG, a collection of one-off songs he'd written and performed for motion pictures across his solo career. This year, that album gets a wider release beyond its picture disc pressing for Record Store Day; it'll now be available on CD and vinyl this Friday, June 12. A longtime film fan who once nearly enrolled at a London film school before his work in Genesis became noticed by the British music press, Gabriel has been no stranger to writing music for

END_OF_DOCUMENT_TOKEN_TO_BE_REPLACED

In the 1980s, after a successful run as a key member of Bruce Springsteen's E Street Band as well as a key architect of the rock-and-soul-infused "Jersey Shore sound," Steven Van Zandt struck out on his own. A new box set from UMe will showcase his solo evolution. The singer/songwriter/producer/guitarist's RockNRoll Rebel - The Early Work will collect five of Little Steven's solo works on colored vinyl - Men Without Women (1982), Voice Of America (1984), Freedom - No Compromise (1987),

END_OF_DOCUMENT_TOKEN_TO_BE_REPLACED

Having brought his catalogue into the digital and streaming age on his own timeframe, Peter Gabriel is now offering more than 60 rare tracks in a new compilation. Flotsam and Jetsam, announced today as a digital album, offers B-sides, remixes and non-album tracks spanning Gabriel's extensive solo career from 1976 (a cover of The Beatles' "Strawberry Fields Forever" from the All This and World War II soundtrack) to 2016 ("The Veil," penned for the dramatic biopic Snowden). In between, there's

END_OF_DOCUMENT_TOKEN_TO_BE_REPLACED

Real Gone Music has recently given soundtrack lovers and vinyl aficionados something to talk about with two new color vinyl reissues of turn-of-the-millennium soundtracks:  Music from Vanilla Sky (on "blue cloud" vinyl) and Orange County: The Soundtrack (on orange vinyl).  The plots of both films are tied to the music within.  The soundtrack for the far-out Vanilla Sky shifts moods and tones while maintaining some sense of cohesion as it takes listeners from classic rock to folk, trance and

END_OF_DOCUMENT_TOKEN_TO_BE_REPLACED

Throughout his career, Phil Collins has always been willing to share his talents - whether at the microphone or the drum kit, as a songwriter, or in the producer's chair - with his fellow musicians.  On September 28, the superstar will collect 59 of his favorite collaborations on a new 4-CD box set.  Rhino/Atlantic will release Plays Well with Others just one week before Collins launches his Not Dead Yet, Live! tour on October 5 in Fort Lauderdale, Florida. Collins states in the press

END_OF_DOCUMENT_TOKEN_TO_BE_REPLACED

Earlier this year, the BBC confirmed plans for the feature-length documentary film Genesis – Together and Apart, chronicling the ups and downs of the 2010 Rock and Roll Hall of Fame inductees.  On the heels of that project which featured the cooperation of Peter Gabriel, Phil Collins, Tony Banks, Mike Rutherford and Steve Hackett, Rhino (for North America) and Universal (for the rest of the world) have announced the September release of R-Kive, a 3-CD collection continuing the “together and

END_OF_DOCUMENT_TOKEN_TO_BE_REPLACED

Peter Gabriel, Scratch My Back and I'll Scratch Yours (Real World) In 2010, Peter Gabriel released Scratch My Back, a new set of cover songs. The plan was to pair them up with covers of his own work by the artists he covered; some of them were released as B-sides but others never materialized. (Radiohead, David Bowie and Neil Young declined to contribute.) This version combines the original album with those covers (also separately released today), including cuts by Arcade Fire, Paul Simon, David

END_OF_DOCUMENT_TOKEN_TO_BE_REPLACED

Virgin Records, one of England's most iconic labels, turns 40 this year - and they're celebrating with a new compilation full of hits from their storied existence. The Virgin label was largely the brainchild of one young businessman named Richard Branson. The London-born Branson began his career selling records by mail order and later opening a shop on Oxford Street. The Virgin label was blessed with early success thanks to a willingness to sign acts that major U.K. labels were keen to dismiss.

END_OF_DOCUMENT_TOKEN_TO_BE_REPLACED

Peter Gabriel's So box set, released last year, was the subject of much controversy. Many fans wondered why Gabriel's team would offer "DNA" tracks of the songs from the album coming together instead of the many B-sides and remixes that have yet to be anthologized on CD. They bemoaned the lack of 5.1 surround mixes and questioned the decision to not release the accompanying Live in Athens concert - remixed and re-edited from live footage recorded for the P.O.V. documentary - on Blu-Ray, but DVD

END_OF_DOCUMENT_TOKEN_TO_BE_REPLACED 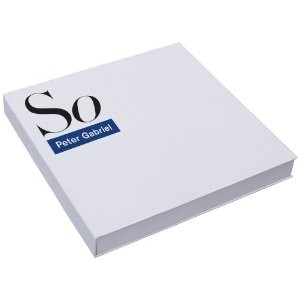 In yesterday's first part of the So box set review, we discussed the original album proper and the accompanying So DNA bonus disc. Part 2 continues with a look at a live show, some visual content and more. If there's a major mistake on the So box set, it's keeping the So DNA disc exclusive to a $100+ box set. As much as it replicates the original album (with a different spin, naturally), it feels closer to the mothership than the great but best-taken-separately experience of Live in Athens

END_OF_DOCUMENT_TOKEN_TO_BE_REPLACED 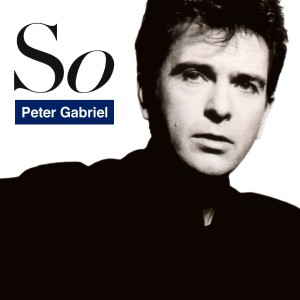 When Peter Gabriel's So hit stores in the spring of 1986, it wouldn't be unfair to call almost everything about the ex-Genesis' fifth record a complete surprise. For one, the record had a title, boldly marked in the upper left corner as if a challenge to the reader. Moreover, the album sleeve showed not a Hipgnosis-created aberration of Gabriel - obscured by raindrops, jagged scratches, or photo manipulation that seemed to melt half his face off - but a Peter Saville-crafted black-and-white

END_OF_DOCUMENT_TOKEN_TO_BE_REPLACED

Peter Gabriel, So: 25th Anniversary Edition (3CD Deluxe Edition: U.S./U.K.; 4CD/2DVD/2LP Box Set: U.S./U.K.; Classic Albums: So DVD (U.S./U.K.)/BD (U.S./U.K.)) (Real World) A year late for the actual 25th anniversary (PG never was one for deadlines), So sledgehammers record shops with a variety of expanded formats, including one of many mega box sets released this year. The Beatles, Love Me Do (50th Anniversary Single) (U.S./U.K.) (Capitol/EMI) Originally bungled due to a mispressing, The Fab

END_OF_DOCUMENT_TOKEN_TO_BE_REPLACED

[youtube=http://www.youtube.com/watch?v=9AcEWMXeQH8] Before we close up shop at Second Disc HQ today, we thought you might want to have a look at two newly released videos showcasing two upcoming deluxe box sets. Above we see the packaging and part of the video content for Peter Gabriel's So box set (out October 22), and below we see the book that comes with Universal's upcoming Never Mind The Bollocks Here's The Sex Pistols deluxe set, due in stores September 24. (The prime unreleased outtake,

END_OF_DOCUMENT_TOKEN_TO_BE_REPLACED 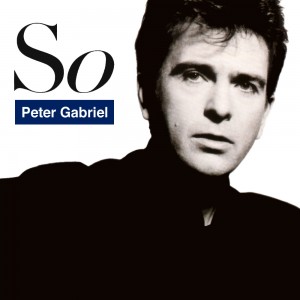 The 1986 release of Peter Gabriel's So was, arguably, the apex of an iconic frontman's idiosyncratic career. Here was an artist taking everything he had offered the audience to date - introspective slice-of-life balladeering, cutting-edge dance-rock, polyrhythmic world music influences - and spinning it into a slickly produced tour de force that caught on with MTV-addled youths as well as an older, more mature generation familiar with his work, either solo or as the original frontman for

END_OF_DOCUMENT_TOKEN_TO_BE_REPLACED 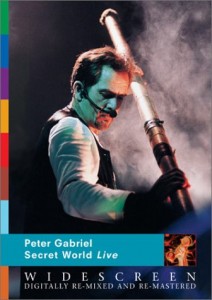 While you count down the months until Peter Gabriel's 25th anniversary reissue of So later this year, we have another catalogue project of his to anticipate this year: an expanded Blu-Ray release of 1993's Secret World Live. After the much-anticipated release of Us in 1992, Peter Gabriel had a big surprise up his sleeve: his (arguably) most ambitious solo tour, a multimedia event so big it took two stages to perform. (For pop trivialists out there, it was also the first major appearance by

END_OF_DOCUMENT_TOKEN_TO_BE_REPLACED 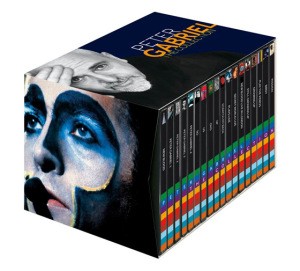 If you're an Italian Peter Gabriel collector, or are looking for a way to get just about his entire solo discography in one fell swoop, you've met your match. Gabriel is partnering with Italian publications TV Sorrisi e Canzoni and Corriere della Sera to sell just about all of his studio albums to create a mega-box for fans. Beginning with his latest project, last year's orchestral New Blood album, 18 sets will be sold at kiosks, one per week, and will ultimately provide a semi-definitive

END_OF_DOCUMENT_TOKEN_TO_BE_REPLACED

[youtube=http://www.youtube.com/watch?v=-huvkhTChQE] With the pretty-great release of orchestral reinterpretation record New Blood under his belt, Peter Gabriel is looking back again by planning a reissue of his excellent 1986 album So - scheduled for 2012, a year after its 25th anniversary - and he wants your help. The in-development reissue is being worked on by Gabriel and his team; in the December installment of his Full Moon Updates, the singer revealed he's working with footage that was

END_OF_DOCUMENT_TOKEN_TO_BE_REPLACED

Here is one of the most exciting sentences we could ever type for soundtrack fans on The Second Disc: Jerry Goldsmith's score to Gremlins is coming to CD from Film Score Monthly. "Cute. Cuddly. Mischevious. Intelligent. Dangerous." Those five words roped audiences into one of the most exciting horror-comedies of the 1980s, Joe Dante's Gremlins. The tale of a storybook American small town rocked by wacky creatures with razor-sharp claws on Christmas Eve was a perfect marriage of humor and

END_OF_DOCUMENT_TOKEN_TO_BE_REPLACED

It was such a busy week that reporting has spilled over into the weekend! Enjoy these tidbits from around the rest of the catalogue music world. Eagle Rock is releasing a vintage live CD/DVD by The Doobie Brothers, from their 1982 farewell tour. Live at the Greek 1982 sees a lineup that included sole original member Patrick Simmons on guitar, longtime co-drummer Keith Knudsen (who shared the kit with Chet McCracken, a member since 1980's One Step Closer), guitarist/violinist John McFee,

END_OF_DOCUMENT_TOKEN_TO_BE_REPLACED

Another bit of excitement first reported by Slicing Up Eyeballs: in his latest update to fans, Peter Gabriel has revealed some plans to give his extensive back catalogue the deluxe treatment. The singer, who recently reissued several of his latter-day albums on his own Real World label, mentioned in his latest Full Moon Club update that his catalogue would be revisited, notably his biggest pop smash, 1986's So. With 25 years since its initial release, Gabriel has had his team searching through