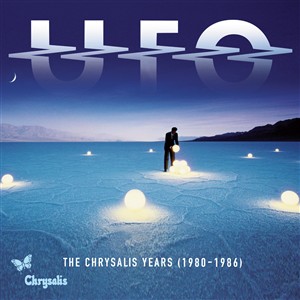 UFO are getting their second budget box set from EMI in the U.K., covering the band's work in the '80s on Chrysalis Records.

A follow-up to last year's budget set from the label, The Chrysalis Years Volume 2 follows the hard-rocking band through several periods of transition. In 1978, virtuosic guitarist Michael Schenker, formerly of Scorpions, left the band, to be replaced by Paul "Tonka" Chapman, the band's guitarist from 1974 to 1975. (This was far from the only lineup change through the decade; bassist Pete Way left in 1982, and was replaced by a myriad of other players over the years. The band would split in 1983, but reunited with (again) a slightly altered lineup, releasing an album and EP between 1986 and 1988. (Afterward, they disbanded yet again, until a new lineup in 1992 gave way to the classic lineup playing through the rest of the decade.)

Despite the changes in personnel, UFO had some career highs in this period. 1980's No Place to Run saw the band work with legendary producer George Martin, while 1982's Mechanix was the band's most successful LP, peaking at No. 8 in England.

The Chrysalis Years Volume 2 collects, across five discs, the band's five albums from the era (No Place to Run, The Wild, The Willing and The Innocent (1981), Mechanix, Making Contact (1983) and Misdemeanor (1986)), plus single edits and B-sides, remixes from the U.S. pressing of Misdemeanor, a mostly-unreleased live concert recorded by the BBC at London's Hammersmith Odeon on the No Place to Run tour and the live material released on 1983's Headstone compilation. (Unfortunately, the live and studio bonus tracks included on recent reissues of No Place, The Wild... and Mechanix do not carry over.)

The set was released April 2 in the U.K. and can be bought after the jump.

Disc 2: BBC in Concert Live at Hammersmith - 2/4/1980 (continued) and The Wild, The Willing and The Innocent