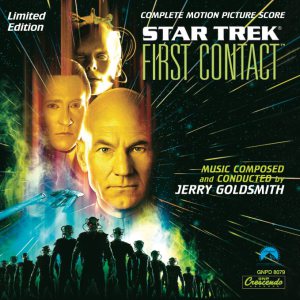 Fans of the soundtracks to Star Trek have had a great few years. Some of our favorite film score reissue labels, including Film Score Monthly, Intrada, La-La Land and Varese Sarabande, have expanded no less than six Trek film soundtracks in the past two years, including The Wrath of Khan (1982), The Search for Spock (1984), The Voyage Home (1986), The Final Frontier (1989), The Undiscovered Country (1991) and the 2009 reboot film, not to mention two box sets of music from Star Trek: The Next Generation.

But this announcement certainly came out of warp drive with no warning: Jerry Goldsmith's score to the 1996 film Star Trek: First Contact is getting expanded and remastered by the label that started Trek catalogue titles on CD, GNP Crescendo Records.

In First Contact, the first Trek film to exclusively spotlight the cast of The Next Generation (1994's Generations had the crew of the Enterprise-D crossing over with William Shatner's James T. Kirk from the original series), Captain Jean-Luc Picard and crew travel to the mid-21st century, the day before Zephram Cochrane first attained warp speed with a spacecraft, coming into peaceful contact with the Vulcans - the first recorded human-alien contact in the Trek canon. The fearsome entity known as The Borg (which famously assimilated Picard in a stunning two-part episode of TNG) has traveled back to the same date following a failed attack on Earth in Picard's present, and the crew have only a day to prevent The Borg from altering history for the worse.

Renowned composer Jerry Goldsmith returned to the Trek universe for his third film score, after Star Trek: The Motion Picture (1979) and The Final Frontier. (His stunning theme to TMP was the theme for The Next Generation, and after Alexander Courage's original theme, is arguably the best-known piece of Trek music.) Goldsmith utilized both Courage's theme and themes from both of his prior scores, in addition to new themes for humanity's hopeful moment of history and the menacing villain opposing them. Goldsmith completed the score in just three weeks with the help of son Joel.

A 13-track soundtrack was released alongside the film by GNP Crescendo in 1996. Eleven of those tracks were score pieces, while the other two were pop songs featured prominently in the film (Roy Orbison's "Ooby Dooby" and "Magic Carpet Ride" by Steppenwolf). This new edition, limited to 10,000 copies, features the complete score along with three unreleased alternate cues.

Boldly go forth and order after the jump!