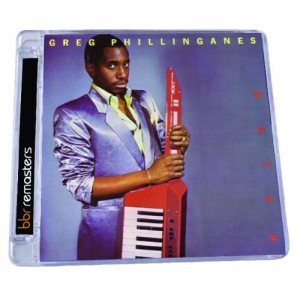 Never a label to count out in the R&B reissue game, one of Big Break Records' latest reissues is guaranteed to put a smile on the faces of liner note hounds everywhere: Pulse, the second solo album from keyboard legend Greg Phillinganes.

While the 28-year-old Phillinganes may not have been a household name when Pulse was released at the end of 1984, anyone with a serious ear for pop and R&B had likely already heard his work: from 1976 to 1981, he served as a keyboardist for Stevie Wonder's backing band, Wonderlove. Crucially, he enjoyed a partnership with Michael Jackson and his musical family, laying down tracks for The Jacksons' sublime Destiny (1978) and Triumph (1981) albums and all of Michael's groundbreaking solo Epic albums from 1979's Off the Wall to 1995's HIStory. His place in the Jackson legend has been further cemented as the keyboardist and bandleader of the ensemble playing in Cirque Du Soleil's Michael Jackson: The Immortal World Tour show.

But before that, Phillinganes was a major player in one of Jackson's most sought-after unreleased songs: "Behind the Mask." Part cover, part adaptation of Ryuichi Sakamoto's Yellow Magic Orchestra song from 1979, it was left off the lineup for Thriller in 1982 due to royalty disputes. Phillinganes performed his own take the song, and took it to the Top 5 on Billboard's dance charts. Two years later, a cover by Eric Clapton, featuring keyboards and background vocals by Phillinganes, was a Top 20 U.K. hit. (A heavily-remixed version of Jackson's original track was finally released in 2010 on the posthumous Michael album.)

"Behind the Mask" is but one centerpiece on the album, which features guest work from a heap of other legendary session players and stars (Nathan East on bass, Michael Boddicker on synths, percussion from Paulinho da Costa and special appearances by The Pointer Sisters, James Ingram and Robbie Nevil). This newly remastered edition includes instrumental and extended mixes of singles "Mask" and "Playin' with Fire" as well as the rare non-LP track "Only You."

The expanded Pulse is due out April 30 in the U.K. and a week later in the States. Hit the jump for the full scoop.