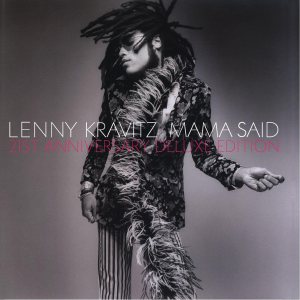 More than two decades after its release, Lenny Kravitz is planning a deluxe edition of his sophomore album, 1991's Mama Said.

The Grammy-winning singer/songwriter has been noted more for his film work lately than his musical career, with solid supporting turns in Precious (2010) and the smash hit The Hunger Games (2012). But Mama Said continued to solidify Kravitz as a unique persona with a bright future ahead of him, the groundwork of which was laid with his 1989 debut, Let Love Rule.

Kravitz's second album was his first to reach the Top 40 in America, and gave him the highest charting single of his career, the sublime "It Ain't Over 'Til It's Over." But, he told Billboard, the album reflects "a crazy time" in his life, one that saw the then-27-year-old musician coping with fame and family (daughter Zoë, mothered by actress Lisa Bonet, was born in 1988; the pair would divorce within years of Mama Said's release). "It was a lot to deal with,” he said. “I ended up kind of going into hibernation, ’cause at that point I went through a pretty serious depression. I just let all these feelings out onto the songs. It was very cathartic for me.”

In addition to those original songs, the double-disc reissue features six non-LP B-sides and 15 unreleased tracks, including rough demos, unreleased remixes of "It Ain't Over" and several unheard songs, including a funk-based tune, "Riding on the Wings of My Lord," and the instrumental "Framed, Lying, Crying."

The deluxe Mama Said is out June 5. The track list is after the jump.