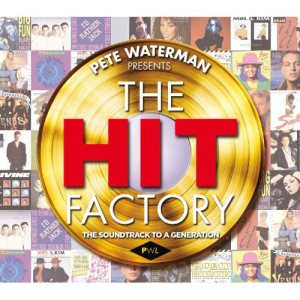 It may have been the "flavor of the month" as European '80s pop went, but the distinctive sounds of Stock Aitken Waterman and the PWL label was one heck of a flavor, earning a rather generous compilation/box set treatment, Pete Waterman Presents The Hit Factory: Soundtrack to a Generation  in the U.K. this summer.

Mike Stock, Matt Aitken and Pete Waterman began working for Waterman's PWL production company in 1984, specializing in Hi-NRG dance music by U.K. pop artists like Hazell Dean and Dead or Alive; the latter group's "You Spin Me Round (Like a Record)," produced by the SAW team, was a No. 1 hit in the U.K. and peaked at No. 11 in the States, the first step in solidifying the team's popularity.

When they attracted the attention of girl group Bananarama, however, things really started to take off. The SAW/PWL collective turned into England's equivalent of the Motown assembly line, with an array of fresh-faced young talent performing peppy originals and synthed-up covers of pop classics. Several of the artists, including Rick Astley and Kylie Minogue, enjoyed major international success.

While the mainstream press usually dismissed their works as fluff, those who came of age among '80s and '90s pop charts do love what they heard, and have been well-suited by the odd wave of nostalgia for that sound in the form of reissues and compilations (Cherry Pop has overseen expansions of many PWL albums in recent years, along with this compilation from longtime SAW partner and engineer/mixer Phil Harding).

A PWL "Hit Factory Live" Concert to be held in London next month will feature a good amount of the artists on this new set, which will be available from Sony in the U.K. as a double-disc compilation or a triple-disc box set with a bonus CD of rare and unreleased dance mixes. Both sets will be released in England on July 9, two days ahead of the anticipated live event.

Hit the jump to take a look at all the hits on The Hit Factory!