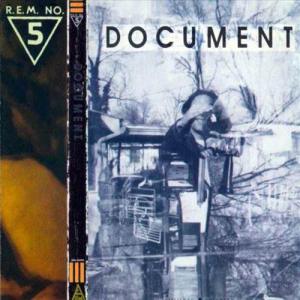 Not long before R.E.M.'s surprise breakup last year, the iconic Athens, Georgia-based quartet had just put out the latest in an ongoing series of 25th anniversary edition packages, pairing 1986's excellent Lifes Rich Pageant with a disc of unreleased demos. After the split, surely there were fans worrying whether that series would continue - particularly since the next album on the list was their fifth album Document (1987), not only one of their best works but one of their first brushes with major commercial acclaim.

Happily, it was revealed late last week that an expanded Document is indeed coming out this September. The bonus disc looks to be an unreleased but heavily bootlegged concert from the band's Work Tour of 1987, one that sees the band playing their biggest hits at the time before a captive audience in Utrecht, Holland. (The show is, unfortunately for superfans, not complete, missing four covers, including fan favorite "Superman" - originally performed by The Clique and recorded for Lifes Rich Pageant - and punk group Wire's "Strange," recorded for Document.)

From the thunderous, pulsating opening of "Finest Worksong," it's easy to see why David Fricke called Document "the sound of R.E.M. on the move." It was urgent and angry, reacting to the twilight of the Reagan presidency on tracks like "Exhuming McCarthy," but the jangly guitar figures and propulsive hooks that made the band the darling of American college radio were still there, aided for the first time by co-producer Scott Litt, who would collaborate with the band on their next five LPs.

While R.E.M. were no stranger to critical plaudits during their tenure on the I.R.S. label, Document yielded a heavy payload on the sales side of things. Lead single "The One I Love," an upbeat track hiding lyrics of emotional abuse, became the band's first of three U.S. Top 10 hits; the LP itself went platinum, further strengthened by radio-ready tunes like iconic, rapid-fire rocker "It's the End of the World As We Know It (and I Feel Fine)." Bolstered by its success, the band would part ways with I.R.S. Records and sign to Warner Bros., where they remained for the rest of their careers.

Like R.E.M.'s previous deluxe expansions with Capitol/EMI, both discs are housed in a lift-top box with four art prints on postcards. Look for this one (as well as a vinyl reissue from Mobile Fidelity) on September 25, and hit the jump to pre-order your copy.