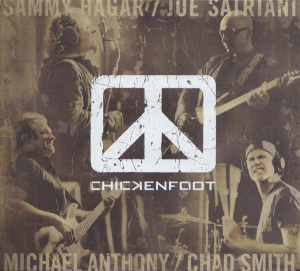 It only saw release a few years back, but hard-rock supergroup Chickenfoot is reissuing their out-of-print debut album with a nice amount of extra tracks.

Amazingly, despite its A-list status (and, for a modern rock album, impressive gold record from the RIAA for over 500,000 copies shipped), the album fell out of print in recent years. To remedy this, the group acquired the masters are partnering with the eOne label (who released the band’s sophomore disc, Chickenfoot III, in 2011) to expand and reissue the disc.

The double-disc set will feature newly-heard live tracks recorded during the group’s Different Devil Tour, in support of Chickenfoot III – all of which seem to be songs from that album – as well as “Bitten by the Wolf,” a studio bonus track on import pressings and digital editions of the original album. (No word as to whether or not the new pressing will retain the neat original cover, printed with heat-sensitive ink.)

Hit the jump to pre-order your copy and view the track list. (A hat tip to Ultimate Classic Rock for getting the scoop on this set!)