Might as well jump: Mobile Fidelity Sound Lab has announced that Van Halen's first six multi-platinum albums originally released on the Warner Bros. label will be coming to hybrid stereo SACD (playable on all CD players) as well as to audiophile-standard UltraDisc One-Step 180-gram, 45 RPM vinyl.  The band's incendiary debut Van Halen (1978) is due for release in the fourth quarter of 2022, with Van Halen II (1979), Women and Children First (1980), Fair Warning (1981), Diver Down (1982), and

END_OF_DOCUMENT_TOKEN_TO_BE_REPLACED

Yesterday, the world lost two titans of popular song, Eddie Van Halen and Johnny Nash.  We salute them both. Eddie Van Halen, who died of cancer at the age of 65, was born in Amsterdam and rose to fame in southern California, but his music belonged to the world.  Guitarist Eddie and brother-drummer Alex formed the band that became Van Halen in 1972 and paid their dues in the ensuing years, earning fans such as Gene Simmons and Kim Fowley.  Once Warner Bros. Records took notice of them in

END_OF_DOCUMENT_TOKEN_TO_BE_REPLACED

Many of this year's finest box sets came courtesy of the Rhino label.  Here, Joe and Randy take a look at a few more of our favorites!  First up are Randy's three picks... First up is Rhino's 25th anniversary 3-CD/1-LP Super Deluxe Edition of Stone Temple Pilots' Purple. Initially hitting shelves on June 7, 1994, the band's sophomore album would debut atop the Billboard 200 and stay there for three weeks, eventually becoming the group's second best-selling album after their debut effort,

END_OF_DOCUMENT_TOKEN_TO_BE_REPLACED

Welcome to today's Release Round-Up for the first international Friday release date!   Like you, we're still adjusting to the switch from Monday in the U.K./Tuesday in the U.S. to a worldwide Friday date.  Please sound off in the comments below on whether you would like to see us run this longtime feature each Friday, or earlier in the week (so that you may plan ahead for Release Day)! The Hollies, Changin' Times: The Complete Hollies, January '69 - March '73 (Parlophone) (Amazon U.S. /

END_OF_DOCUMENT_TOKEN_TO_BE_REPLACED

There soon will be many more Yessongs. Progressive rockers Yes released the triple-LP live album Yessongs in 1973. It captured the band at the height of its powers, riding a wave of success thanks to the 1972 album Close to the Edge. In the weeks leading up to the recording of Yessongs, however, the band recorded a number of shows that are now being collected in Rhino's massive 14-CD box set Progeny: Seven Shows from Seventy-Two. The May 19 release contains seven complete shows recorded in

END_OF_DOCUMENT_TOKEN_TO_BE_REPLACED

MusicTAP reports the release of the first-ever CD/DVD compilation by Van Halen frontman David Lee Roth, due in November from Friday Music. Of course, anyone with even a middling interest in rock and roll probably knows Roth as the irascible frontman for Van Halen, who, with the Van Halen brothers (guitarist Eddie and drummer Alex) and bassist Michael Anthony, propelled themselves into the genre's stratosphere with six albums for Warner Bros. between 1978 and 1984. They were writing shred-worthy

END_OF_DOCUMENT_TOKEN_TO_BE_REPLACED

If you're looking for a gift for a new (or maybe even an old) Van Halen fan, Rhino has you covered in March with the release of the band's first six albums in one package. The Studio Albums 1978-1984 is a no-frills package of VH's first great era, all the albums released with original vocalist David Lee Roth at the helm. Featuring the now-immortal six-string styles of Eddie Van Halen, the devastating rhythm section of bassist Michael Anthony and drummer Alex Van Halen and the clean production

END_OF_DOCUMENT_TOKEN_TO_BE_REPLACED 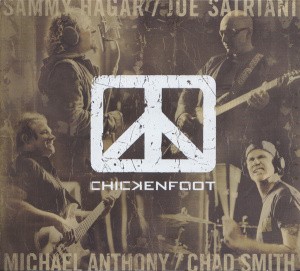 It only saw release a few years back, but hard-rock supergroup Chickenfoot is reissuing their out-of-print debut album with a nice amount of extra tracks. The incredible pedigree of the band - featuring former Van Halen members Sammy Hagar and Michael Anthony on vocals and bass, respectively, along with guitarist Joe Satriani and Red Hot Chili Peppers drummer Chad Smith - earned a heavy amount of media attention upon first release, particularly as Hagar and Anthony's former bandmates in Van

END_OF_DOCUMENT_TOKEN_TO_BE_REPLACED 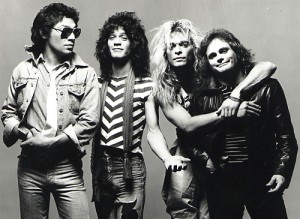 Welcome to another installment of Reissue Theory, where we focus on notable albums and the reissues they may someday see. As Van Halen prepares to take Second Disc HQ by storm, we reflect on a compilation that almost was, and how it could've been done, TSD-style... Van Halen are mere hours away from their second show at Madison Square Garden in New York City, part of their latest tour in support of their first album in 13 years (and first with lead vocalist David Lee Roth since 1984), A