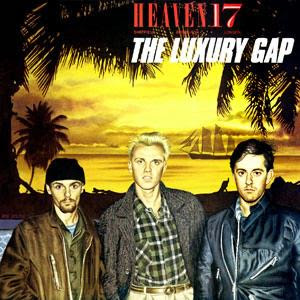 Two more expanded editions of titles by English ’80s pop bands are due in the next month “across the pond,” as they say.

Heaven 17’s debut LP Penthouse and Pavement, released in 1981 and reissued for its 30th anniversary last year, established themselves as a socially-conscious but still danceable band with singles like the famously banned-by-the-BBC “(We Don’t Need This) Fascist Groove Thang.” But with sophomore album The Luxury Gap, singer Glenn Gregory and keyboardists Ian Craig Marsh and Martyn Ware, further fused their minimalist, occasionally political New Wave style to some of the most danceable beats around. Second single “Temptation” became the group’s biggest single in their native U.K., peaking at No. 2 (not to mention a No. 4 placement in 1992 with a remix from Brothers in Rhythm), and follow-up “Come Live with Me” was a Top 5 hit. (In the U.S., the moody, percolating “Let Me Go” – a stiff in England, missing the Top 40 entirely – was a Top 5 hit on Billboard‘s Dance/Club Play charts, arguably becoming the band’s most successful song on our shores.)

Much like the expanded Penthouse and Pavement, this expanded edition of The Luxury Gap features two discs – one of the remastered album and one of eight period remixes of “Let Me Go,” “Temptation,” “Come Live with Me” and “Crushed by the Wheels of Industry” (plus the aforementioned 1992 mix of “Temptation”) – along with a DVD featuring five music videos and live footage from a 2009 gig with continuing Heaven 17 members Ware and Gregory. (That lineup will tour later this year, playing The Luxury Gap in full.)

After the jump, take a look at what Universal U.K.’s doing for a classic LP from Level 42! 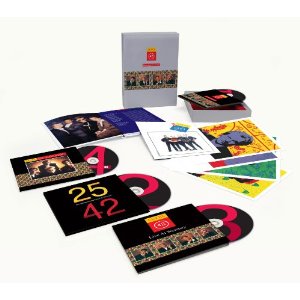 While the funk-pop outfit Level 42 might be considered one-hit wonders by some in the U.S. for their brilliant single “Something About You,” that distinction’s not even technically true on this side of the Atlantic: “Lessons in Love,” the band’s next single and teaser for the Running in the Family LP, just missed Billboard‘s Top 10. Of course, “Lessons” was just the start of Level 42’s biggest period of commercial success in the U.K. and Europe; that song hit No. 3 in the U.K. (and higher throughout Europe, including the top of the Swiss and German charts), earning them their highest chart placement. Follow-up singles “Running in the Family,” “To Be With You Again” and “It’s Over” were also Top 10 hits in England. While the album was the last to be recorded by the original lineup (drummer and guitarist Phil and Roland Gould would depart in 1987, both citing exhaustion, though Phil would continue to pen lyrics for the group), Level 42 would still keep Top 10 albums and a fistful of Top 40 singles in their native land well into the 1990s, after which they temporarily disbanded. (Singer/bassist Mark King launched his solo touring band under the Level 42 name in 2001, and original keyboardist Mike Lindup rejoined the new ensemble in 2006.)

To commemorate the 25th anniversary of Running in the Family, Universal U.K. plans not one but two deluxe editions of the LP. The four-disc box set includes the original album plus bonus 12″ mixes from the beloved “platinum edition” reissue of the album in England, an unreleased 1987 live show at London’s Wembley Stadium, a new disc of “acoustic reinterpretations” of the album by the current lineup of the band and a DVD including a vintage live show, released on video as Fait Accompli in 1987, and the original promo videos. A truncated two-disc expanded edition includes the vintage remixes, as well as highlights from both bonus discs, on the second CD.

Both the Heaven 17 and Level 42 sets will be out next month, with the Level 42 reissues available in the U.K. October 8 and the Heaven 17 expansion in stores October 22. (All titles will of course be available as imports about a week later in the States.) Full specs for all titles and Amazon links exist below!