With a Song in Their Hearts: Supremes’ “Symphony” is Latest Expansion from Hip-O Select 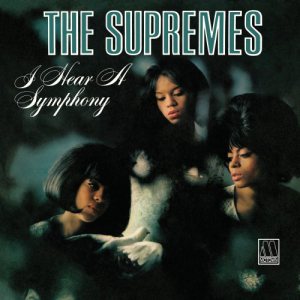 Hip-O Select’s latest release is quite literally “so inviting, so exciting”: The Supremes’ 1966 LP I Hear a Symphony is the latest in the girl group’s discography to get the deluxe treatment.

The year before, Motown founder Berry Gordy was shocked by the soft chart placement of his Supremes’ latest effort, “Nothing But Heartaches.” The single “only” placed just one spot under the Billboard Top 10 – but it was still a blow for Gordy, who’d seen his onetime “no-hit” trio enjoy a run of five consecutive No. 1 singles. Bolstered by a memo in which Gordy vowed “nothing less than Top 10 product on any artist; and because The Supremes’ world-wide acceptance is greater than the other artists, on them we will only release number-one records,” the Holland-Dozier-Holland songwriting team broke their predictable-if-catchy style of songwriting (in turn binning the single release of “Mother Dear” from More Hits by The Supremes) and penned “I Hear a Symphony.”

The tender, uplifting love song, with a swelling orchestral arrangement to justify its title and a rising tide of key changes, was just what Gordy wanted. “Symphony” was another chart-topper for the group, and follow-up “My World is Empty Without You,” a surprisingly somber heartbreak song, was a Top 5 single. Those tunes were the gems of the I Hear a Symphony album, released three months after the title track topped the charts, but the album is full of strong selections itself, not solely from the H-D-H brain trust (“Any Girl in Love,” “He’s All I’ve Got”) but from across the canon of ’60s pop (The Beatles’ “Yesterday,” The Righteous Brothers’ “Unchained Melody”; Linzer and Randell’s “A Lover’s Concerto,” a No. 2 hit for The Toys in 1965) and Broadway (Rodgers and Hart’s “With a Song in My Heart,” “Stranger in Paradise” from the musical Kismet).

In the tradition of Hip-O Select’s best releases, bonus material is abundant. The first disc includes the original mono and stereo mixes of the LP (the latter of which is almost entirely making its CD debut); as was so often the case with two distinct mixes of the same album, listeners will enjoy several alternate vocal tracks and unfamiliar mixes of these beloved tracks. Those alternate experiences continue with new mixes of “Symphony” and “My World is Empty” appended to the first disc and alternate takes of “Unchained Melody,” “A Lover’s Concerto” and “Wonderful! Wonderful!” – and the set closes out with a 20-track live set at Detroit’s Roostertail in September 1966, recorded nearly a year after the release of the “I Hear a Symphony” single that bought The Supremes right back to the top.

The deluxe I Hear a Symphony, limited to 2,000 copies, begins shipping from Hip-O Select on September 21 and has a general retail date of October 9. The full track list and order link are, as always, after the jump!