41 Years of Maximum R&B: UMe Plans Vinyl Box Set for The Who 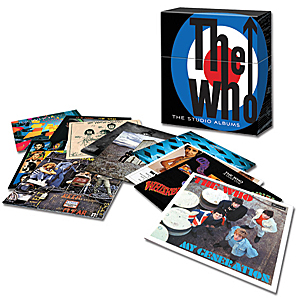 We've seen a lot of new product for fans of The Who lately: Eagle Rock released the Live in Texas 1975 DVD, UMe is planning a standalone release of the Hull show from 1970 that appeared in the Live at Leeds box set a short time ago, guitarist Pete Townshend's memoir - and now, Universal announces a newly-remastered vinyl box set of The Who's studio albums.

The simply-titled The Studio Albums features all 11 Who albums on 14 180-gram vinyl discs, from 1965's My Generation to 2006's Endless Wire. In addition to being remastered by the band's longtime engineer Jon Astley and Miles Showell at Close to the Edge and Metropolis Studios, all the original artwork will be replicated for these reissues. That includes everything, down to the original posters inserted into The Who Sell Out and Face Dances.

Advertised as "strictly limited," The Studio Albums is available November 19. Here's a look at what's included: