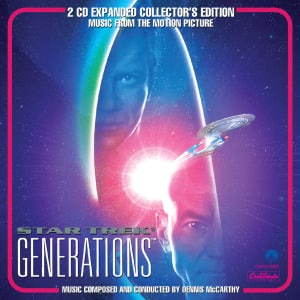 If you thought the Star Trek reissue renaissance couldn't get any better this year, there's at least one more release to bring your ears into maximum warp: GNP Crescendo, longtime Trek soundtrack label, announced yesterday an expanded edition of the score to 1994's Star Trek: Generations.

Generations came to theaters months after the end of Star Trek: The Next Generation, an excellent program which rekindled interest in Gene Roddenberry's space franchise. It was no surprise that Patrick Stewart's Captain Picard and the crew of the U.S.S. Enterprise (NCC 1701-D) make the jump to the big screen; in this adventure, the Federation battles a volatile energy ribbon known as "The Nexus," as well as a treacherous doctor (Malcolm McDowell) bent on harnessing its power. What was a surprise, though, was the ally that aids Picard on the mission: none other than Admiral James T. Kirk (William Shatner, returning to his most iconic role after a three-year absence), believed killed by The Nexus a century earlier.

Generations earned high praise from audiences eager to see both Trek series cross over on celluloid, although critics were divided. What was hard to argue, however, was the sturdiness of Dennis McCarthy's score. McCarthy was, of course, no stranger to the franchise, having scored a great deal of TNG; he continued several of the musical ideas developed on the small screen, beefing it up for the cinema and adding statements of Alexander Courage's original theme.

For this new edition, limited to 10,000 copies, GNP follows what is by now a traditional industry practice, including the complete score on one disc and the original soundtrack album and other highlights - in this case, a great deal of sound effects and three bonus tracks (including Brent Spiner's humorous original song "Lifeforms" from the film) - on another.

If you're keeping score at home, the first eight Trek films (and 2009's Star Trek reboot) have received expanded score presentations by soundtrack reissue labels. Order it here and hit the jump for the full track list.