Review: Peter Gabriel, “So: Immersion Box Set” – Part 2: This is the Picture

In yesterday's first part of the So box set review, we discussed the original album proper and the accompanying So DNA bonus disc. Part 2 continues with a look at a live show, some visual content and more. 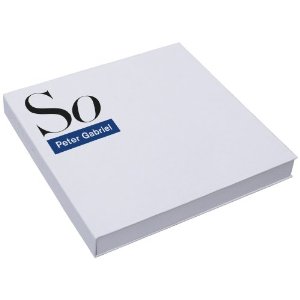 If there's a major mistake on the So box set, it's keeping the So DNA disc exclusive to a $100+ box set. As much as it replicates the original album (with a different spin, naturally), it feels closer to the mothership than the great but best-taken-separately experience of Live in Athens 1987.

Available across two CDs which are also included on the less-pricey deluxe edition (and one DVD, again exclusive to the box), the impeccable-sounding show is taken from multitrack masters recorded at the end of the This Way Up Tour at the Lycabettus Theatre in Athens. (The footage was recorded for POV, a 1987 video documentary produced by Martin Scorsese.) On a technical level, the show is rather great: the colors are crisp and the sound warm and inviting - and the band, comprised of guitarist David Rhodes, bassist Tony Levin, keyboardist David Sancious and drummer Manu Katche (the very same core of Gabriel's touring band on this year's So-centric Back to Front Tour), is in top form. (Youssou N'Dour reprises his irreplaceable vocals on "In Your Eyes.")

But what makes the set frustrating is how little it feels like a So-worthy experience. Only five of the 16 songs in the set appear on that album, hardly the full-album experience Gabriel delivered audiences in the past few months. And there are points when it's almost too pristine, with plenty of pre-recorded overdubs present on "Sledgehammer," "Shock the Monkey" and the like. There's nothing wrong with that, per se; heaven knows Gabriel would only graduate to more enormous tour experiences as his career went on. But, again, given what fans haven't been allowed to enjoy on the box - the B-sides, remixes and such - it might have made more sense to present Live in Athens on its own, where it wouldn't pale next to the specter of what isn't there.

The video content is rounded out with a slow-to-start but ultimately satisfying Classic Albums documentary on So, running about an hour (not counting 35 minutes of extra and extended segments) and featuring new interviews with Gabriel, Levin, Katche, producer Daniel Lanois, engineer Kevin Killen, Rolling Stone columnist David Fricke and more. There are certainly many more whose insights would have been welcomed - N'Dour, guest vocalist Kate Bush, "Sledgehammer" director Stephen R. Johnston - but all interviewees are game and engaged. Of particular interest are segments where Lanois and Gabriel separately replay various cuts direct from the So multitracks, highlighting various details hidden deep in the mixes. (Lanois is visibly moved by the vocal interplay between Gabriel and N'Dour on "In Your Eyes," a happily chilling moment.)

While much of the best bits of the interviews are actually reprinted in the liner notes (which are extremely worth it for gorgeous candid pictures recording in Ashcombe House in Bath, on the set of "Sledgehammer" and onstage), there is much to enjoy. It's clear So was a high watermark for all involved - even if, as recounted in several funny anecdotes, Lanois had to resort to desperate measures to keep the notoriously deliberate singer on track in the ten months of So sessions. Again, there is much to pick at what could have been included on this disc - more on that iconic album sleeve design would have been nice, as well as those great music videos for "Sledgehammer," "Big Time," "Don't Give Up" and "Red Rain." But fans looking for the right balance of insight and retrospective will walk away satisfied.

The So box does close with some multimedia; namely, two respectably heavyweight vinyl LPs and some downloadable content. One platter features the remastered So, while another features two outtakes: there's "Courage," an addictive jam of a track; "Sagrada," a more throwaway piece that anticipates bits of "Don't Give Up" and "In Your Eyes"; and a different mix of "Don't Give Up," featuring alternate piano runs and more, alternate vocal passages from Kate Bush. Those tracks would have certainly fit well on a CD with B-sides and the like, but they are included as a FLAC download (along with the So album and a 720p HD file of the Live in Athens video) for you to add to your media players and whatnot.

The bottom line with this divisive box: on a literal level, the So package is indeed an immersion into the fascinating, joyful musical headspace of Peter Gabriel in 1985 and 1986, as he transmogrified from A-1 cult artist to MTV's brightest star. It is by no means complete; few such packages are. My enjoyment of the extras remains tempered by the thoughts of what could have been, with pristine versions of the So videos on Blu-Ray and the Special Mix of "In Your Eyes" at the ready to add to my most romantic iTunes playlists.

But - accepting all I've done and said - So means so much to this writer that it's worth it to accept the box for what it is, hope for a proper B-sides compilation down the road - and tell you, our all-important readers, that those who love this album have my solemn promise that this box set is worth the price of admission. It underlines what made So such a captivating piece of art, and turns that process into art itself. Let there be no doubt about it.