Running Through My Head: Universal Preps 2012's Most Unusual Reissue 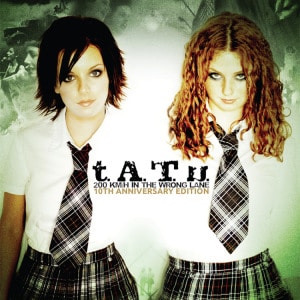 Folks, we've seen a lot of strange things since starting The Second Disc almost three years ago. Plenty of surprising reissues and disappointing reissues and unexpected compilations and the like. But even in an age where catalogue product seems not to be surviving but thriving, I think I've seen it all: Universal is planning a deluxe 10th anniversary edition of 200 km/h in the Wrong Lane, the 2002 debut album by t.A.T.u.

Okay, perhaps you don't remember the bizarre Russian pair of Lena Katina and Yulia Volkova, two teenagers from Moscow whose Trevor Horn-produced electro-pop nugget "All the Things She Said" topped singles charts in the U.K. and six other countries a decade ago. (In the U.S., it settled for No. 20.) Coupled with an internationally-controversial video that had the pair clad in schoolgirl outfits and kissing each other - on the lips, no less, recalling an age where mainstream depictions of homosexuality were perhaps even more highly taboo than they might be now - t.A.T.u. were one of the most jaw-dropping bands of this author's MTV-injected middle and early high school years, at a time when such things could shock. (Imagine the further shock when word got out that Katina and Volkova's canoodling was merely an act!)

Despite another international Top 5 with "Not Gonna Get Us" and a super-weird cover of The Smiths' "How Soon is Now?," American audiences were quick to forget t.A.T.u. (outside of the I Love the '90s series on VH-1, probably), and the duo separated last year, having most recently released an English-language album, Waste Management, in  2009.

But! All hope is not lost for those anxious to hear new and reissued works from the band, with a 10th anniversary "Gold Edition" of 200 km/h planned for release this winter. The disc will include three remixes, including a vintage (Editor's note: did I just call this vintage? What is wrong with me?) remix of "30 Minutes," included on international pressings of the album and a new mix of "All the Things She Said" by Fernando Garibay (best known as co-producer on Lady Gaga's Born This Way last year). There's also a "new" track, "A Simple Motion," in fact an unreleased tune making its English-language debut for the first time. (In 2002, the group's Russian version of this track, "Prostye Dvizheniya," was a non-LP single.)

Now that I've typed over 380 words about t.A.T.u., know that the disc streets on November 12 on Interscope/Cherrytree (the latter of which is presided over by songwriter/producer Martin Kierzenbaum, who co-wrote "All the Things She Said") and can be ordered from Amazon U.S. (a U.K. link astoundingly has yet to materialize); know also that we'll still think you're cool even if (especially if?) you snag a copy for yourself. The track list is beyond the jump.