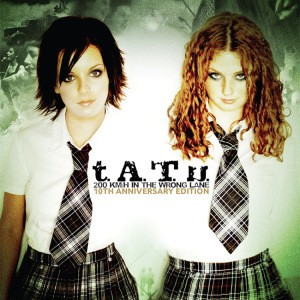 Folks, we've seen a lot of strange things since starting The Second Disc almost three years ago. Plenty of surprising reissues and disappointing reissues and unexpected compilations and the like. But even in an age where catalogue product seems not to be surviving but thriving, I think I've seen it all: Universal is planning a deluxe 10th anniversary edition of 200 km/h in the Wrong Lane, the 2002 debut album by t.A.T.u. Yes, that t.A.T.u. Okay, perhaps you don't remember the bizarre Russian