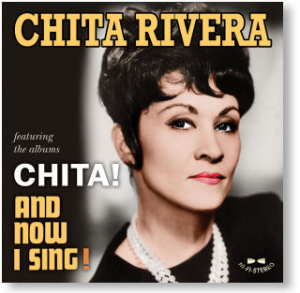 Chita Rivera was the toast of the musical stage in 1961, reprising her New York triumph in Bye Bye Birdie in London’s West End.  Over fifty years later, the resplendent Ms. Rivera is still the toast of the musical stage, wowing audiences nightly as the decadent Princess Puffer in the Broadway revival of The Mystery of Edwin Drood.  Yet the triple-threat dancer/actress/singer who originated roles in musicals including West Side Story and Chicago has made all too few trips to the recording studio outside of preserving her stage roles on original cast recordings.  And anyone who knows any of those cast albums knows that Rivera is as compelling a vocal stylist as she is an onstage presence.  In 2009, Rivera released her third and most recent solo album on the Yellow Sound label, but thanks to Stage Door Records, listeners can now revisit her first two such solo recordings.  On February 25, 2013, the label will unveil the CD premieres of 1962’s Chita! and 1963’s And Now I Sing! on one disc.  (Rivera tipped her hat to the 1963 album when titling her jazzy 2009 effort And Now I Swing!).

Rivera was starring as Rose opposite the Albert of future Hollywood Squares host Peter Marshall in the London production of Bye Bye Birdie when she entered the Philips label’s U.K. studio with arranger Alyn Ainsworth for her first-ever solo album, Chita!.  The respected bandleader oversaw a 12-track collection primarily of theatre and film songs, many of which predated Rivera’s own original-cast Broadway debut in the 1955 musical Seventh Heaven.  (Rivera, billed as Conchita del Rivero, had been a replacement in the ensemble of Can-Can prior to Seventh Heaven.)  These songs included Rodgers and Hart’s “Ten Cents a Dance” from Simple Simon (1930), Burton Lane and E.Y. Harburg’s “Old Devil Moon” from Finian’s Rainbow (1947) and Frank Loesser and Hoagy Carmichael’s “Small Fry” from the movie Sing You Sinners (1938).  Loesser and Lane were also represented with “The Lady’s in Love with You,” their 1939 standard.  Of a more recent vintage were “Love, Look Away” from Rodgers and Hammerstein’s Flower Drum Song (1959) and the rollicking “Get Me to the Church on Time” from Lerner and Loewe’s My Fair Lady (1956), plus Bart Howard’s “Fly Me to the Moon,” first recorded in 1954 by Kaye Ballard as “In Other Words.”  By the time Rivera got around to the song, it had already been recorded by a “Who’s Who” including Eydie Gorme, Peggy Lee, Nat “King” Cole, and Johnny Mathis.  (The famous Frank Sinatra/Quincy Jones rendition followed in 1964.)  And though it’s hard to picture Rivera starring in Oklahoma!, the album features her take on “The Surrey with the Fringe on Top.”

A similar approach to the repertoire was taken for follow-up album And Now I Sing!.  This time, Rivera recorded the LP on her home turf in New York under the baton of musical director Joe Cain for the Latin music label Seeco.  (A truly diverse label, Seeco’s catalogue included Cy Coleman and Eartha Kitt alongside Celia Cruz and Perez Prado.)  An accomplished trumpeter and Latin music legend who worked with artists such as Tito Puente, Seeco’s in-house arranger and A&R man Cain guided Rivera through new arrangements of songs ranging from Rodgers and Hart once more (“Isn’t It Romantic”) to Mancini and Mercer (the Academy Award-winning “Moon River”).  Rivera even put her own stamp on “Falling in Love Again,” Marlene Dietrich’s signature song.    She returned to Loesser and Lane’s songbook for their “I Hear Music,” and revisited Hoagy Carmichael’s catalogue for “The Nearness of You,” with lyrics by Ned Washington (“When You Wish Upon a Star”).

There's more after the jump including a pre-order link and full track listing with discography!

Chita Rivera was back on the boards in 1964, the year following the release of her second album.  Though her delicious star performance as the gypsy Anyanka in Ernest Kinoy and Walter Marks' Bajour (preserved on disc by Columbia) is only known to the most diehard musical aficionados, her next starring role on Broadway was an immortal one: the original Velma Kelly in Bob Fosse’s Chicago, with a score by John Kander and Fred Ebb.  Not that Rivera was idle between 1964’s Bajour and 1975’s Chicago; she embarked on a number of national tours and regional performances, created a role in Meredith Willson’s 1491, and memorably portrayed Nickie in Fosse’s film version of his stage smash Sweet Charity.

Chita Rivera, a 2002 Kennedy Center Honoree, is still giving ‘em the old razzle-dazzle each night in New York, for much more than ten cents a dance!  The time has never been better to revisit these two lost chapters of her remarkable career.  Stage Door’s reissue of Chita!/And Now I Sing! includes an eight-page color booklet, and is due in stores on February 25, 2013.  A pre-order link is not yet available at Amazon, but you can click below to order directly from Stage Door.