As 2012 yielded to 2013, more than a few noteworthy releases may have been lost in the shuffle.  Some of the most impressive of those December releases came from Spain's Quartet Records.  The label closed out the year with three particularly spectacular titles that no film score buff will want to miss.

Two came from the prolific pen of Henry Mancini, perhaps the most-represented soundtrack composer in terms of 2012’s releases.  Having previously issued the complete score to Curse of the Pink Panther (1982), the label turned its attention to 1978’s Revenge of the Pink Panther.  The last Panther film to star Peter Sellers in his lifetime (the 1982 picture utilized outtakes of Sellers to create a new film), Revenge was previously on CD only in a severely truncated form emphasizing the funkier sounds in Mancini’s score.  The new Revenge features a full 27 tracks, demonstrating the full breadth of the composer’s work and even including alternate takes from the original album issue.  This deluxe package also includes a detailed essay and track-by-track notes from John Takis in its 16-page full-color booklet. 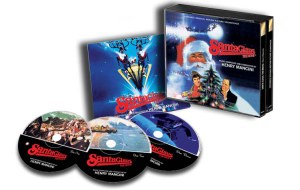 Perhaps even more noteworthy is Quartet’s reissue of Mancini’s original soundtrack to 1985’s Santa Claus: The Movie.  Quartet’s predecessor label Singular Records had released (most of) the original soundtrack album on CD in 2009, but that release was considered lackluster despite the label having done its best with its resources at the time.  The new edition is a completely different case, however: a 3-CD edition presenting the complete film score (34 tracks!), 17 alternates and bonuses, and the original, complete 13-track soundtrack LP, with many themes modified from the originals plus pop songs from Kaja and Sheena Easton.  This new set presents the score in its entirety, remixed from ½″ 3-track stereo and 2" 24-track session masters housed in mint condition in Abbey Road Studios, London.  The 1985 LP has also been remastered from first generation master tapes stored at Abbey Road.  Jeff Bond provides the annotation for the stellar 32-page booklet.  Though many critics derided the epic Santa origin film as excessive, this release proves that Mancini’s score (also containing songs with lyrics by Leslie Bricusse) was just right.

After the jump: take a trip to the Forum, plus the full track listings and order links for all three titles!

Lastly, Quartet has a surprise with an expanded CD reissue of the 1966 film soundtrack to the screen adaptation of Stephen Sondheim’s A Funny Thing Happened on the Way to the Forum.  Director Richard Lester’s picture has always been a controversial one to fans of the classic musical farce.  Though it preserved the original performances of Zero Mostel and Jack Gilford and added the titanic talents of Phil Silvers and Buster Keaton, not to mention a young Michael Crawford, the screenplay eviscerated Sondheim’s Broadway score.  The movie preserved just “Comedy Tonight,” “Lovely,” “Everybody Ought to Have a Maid,” “[Bring Me] My Bride,” “The Dirge [Funeral Sequence]” and a couple of reprises, leaving the clever likes of “Free,” “Pretty Little Picture,” “Love, I Hear,” “That’ll Show Him” and the rest nowhere in sight.  Rykodisc reissued the original United Artists LP in 1998 on CD, but Quartet has done that release one better.  The film’s musical director and composer/adapter of its orchestral score, Ken Thorne, has assisted in providing his complete incidental music and bonus tracks.  So the LP’s original 16 tracks (15 on this release, with “Erronious’ Return” and “Orgy Music – Roman Style” combined into one) have been supplemented by eighteen cues (the complete incidental music) and five bonus tracks.  Famed MAD illustrator Jack Davis' artwork has been utilized for the cover.  This makes for the definitive edition of this soundtrack, and spotlights Thorne’s fine and interesting work in adapting Sondheim’s original music for the necessities of Lester’s film.

All three of these new titles are available from Quartet Records’ website as well as from other fine sites including Screen Archives!

Stephen Sondheim and Ken Thorne, A Funny Thing Happened on the Way to the Forum (Quartet Records SCE051, 2012)