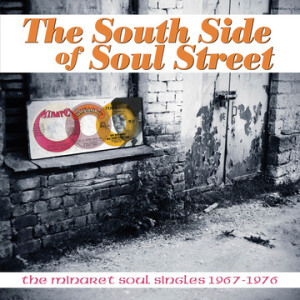 One dictionary defines a "minaret" as "a lofty, often slender tower or turret attached to a mosque...from which the muezzin calls the people to prayer."  So it's appropriate that the Minaret Records label was a beacon itself, inspiring soulful fervor in those who made the pilgrimage to its platters.  Founded in Nashville in the early 1960s, it was purchased in 1966 by Finley Duncan.  Three years later, the producer-entrepreneur founded the Playground Recording Studio in Valparaiso, Florida, where he helmed a number of sizzling R&B singles.  These 45s might have missed the charts, but they have tantalized R&B collectors ever since.  The musical archivists at Omnivore Recordings are coming to the rescue, though, with the 2-CD, 40-track collection The South Side of Soul Street: The Minaret Soul Singles 1967-1976.  The set is due to be released on August 13, 2013.

With Valparaiso not far from the Alabama state line, Duncan and Shelby Singleton - Sun Records owner and Minaret distributor via his SSS International label - established Playground as a southern soul incubator to rival the likes of Muscle Shoals, Fame and Stax.  The South Side of Soul Street brings together 20 of the label's original R&B sides - 40 songs total - released between 1967 and 1976. Even if you managed to collect each (pricey!) single, you still wouldn't have everything in this package, as Omnivore has added a full-color booklet with new liner notes by Bill Dahl detailing the history of the label and studio, as well as the stories of the artists represented on the singles.

What will you find on Omnivore's new anthology?  Hit the jump for details plus a full track listing with discography and pre-order link!

Expect to hear eighteen tracks in all from Big John Hamilton, one of Minaret's leading artists.  Big John appears on 18 tracks (including four duets with Doris Allen), backed by musicians including legendary songwriter and Muscle Shoals mainstay Spooner Oldham and the Memphis Horns. Hamilton was managed by fellow Minaret artist and guitarist Leroy Lloyd, and Lloyd's instrumental recording of "Sewanee Strut" is another highlight.  Harmonica great Willie Cobbs, whose "You Don't Love Me" has been performed by the Allman Brothers Band, Grateful Dead and the Kooper/Bloomfield/Stills "Super Session" group, is heard on 1969's "I'll Only Love You" and "Don't Worry About Me."  And Omnivore lets a Genie - Genie Brooks, that is - out of the bottle with 1967's "Fine Time" and "Juanita," and 1969's "Helping Hand" and this collection's title track, "The South Side of Soul Street."