All four of Patty's United Artists albums released on a pair of two-fers, including 1968's unreleased Sings Folk Songs. 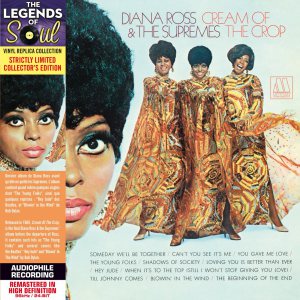 A bunch of Supremes classics - six albums from 1966's The Supremes A Go-Go to 1969's Cream of the Crop, their last with Diana Ross - all get the mini-LP treatment from Culture Factory.

Culture Factory also brings Miss Ross' long out-of-print concert disc back to CD, along with a new, mini-LP edition of the Ashford and Simpson-helmed favorite The Boss.

The second and third LPs by U.K. singer Julia Fordham are expanded and remastered for the first time.

The soundtrack to the anticipated new documentary about the best backup singers you might not have known, from Darlene Love to Merry Clayton. (Legacy's releasing Clayton's first-ever best-of compilation next month.) (Amazon U.S. / Amazon U.K.)

Not sure if this concert kills fascists, but this CD/DVD tribute to a folk legend, featuring John Mellencamp, Lucinda Williams, Rosanne Cash and more is a fitting way to honor one of the century's best songwriters. (Amazon U.S. / Amazon U.K.)