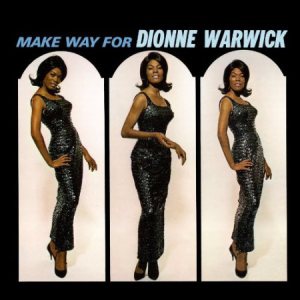 UPDATE 8/6/13: WEA Japan's deluxe mini-LP editions of Dionne Warwick's Scepter and Warner catalogue have finally arrived, but many purchasers have been surprised to find numerous alterations in the albums' bonus material.   Originally-listed bonus tracks have been added, dropped, and reshuffled between albums.  By the numbers, there are 5 more bonus tracks than originally listed, but some songs are absent with others taking their place.  Below, in BOLD, we'll let you know exactly what you'll find on every CD in the series, what's missing, and what's new!

After the jump, we’ll offer an UPDATED, in-depth look at the bonus material on each disc!  Plus: a lost Warwick treasure is finally found - in a most unlikely place!

Very Dionne was the singer’s final original Scepter album.  She soon after signed a groundbreaking contract with Warner Bros. Records, where she debuted with 1972’s Dionne – her final production by Burt Bacharach and Hal David.  Soon the one-time “Triangle Marriage” had an acrimonious split, forcing Warwick to sue her friends and producers for their refusal to work together on the albums they were contractually obliged to produce for her.  Warwick remained with Warner Bros. where she was teamed with producers like Holland-Dozier-Holland, Jerry Ragovoy, Steve Barri and Michael Omartian, and most successfully, Thom Bell.  Though the Warner Bros. years represented diminishing commercial returns following the smash chart-topper "Then Came You," Warwick would be on top again when Clive Davis signed her to Arista.  But that’s a tale for another day.  Each of Warwick’s Warner Bros. albums are getting first-time expanded editions.

Although there is no previously unreleased material on any of these discs, this still represents the most sweeping reissue program for Dionne’s catalogue since the sadly-aborted, near-definitive Rhino Handmade series.  And perhaps one day, the wealth of previously unreleased material will see the light of day.  Some particular treasures remain from the Warner Bros. years.  Two additional songs, “Too Far Out of Reach” and “It Hurts Me So,” were shelved for Just Being Myself.  “Someone Else Gets the Prize” and “We Need to Go Back” were also recorded by Warwick with Nickolas Ashford and Valarie Simpson following the Just Being Myself sessions, and remain unreleased.  (These recordings have since been unveiled, with many more, on Real Gone Music's We Need to Go Back: The Unissued Warner Bros. Masters.)

And then there’s the “Holy Grail” of Warwick’s Warner recordings: three songs recorded at a June 1974 reunion session with Burt Bacharach and Phil Ramone.  With Bacharach estranged from Hal David, the composer turned to Bobby Russell and Neil Simon for lyrics, and produced three songs with Warwick.  Ramone manned the controls at Los Angeles’ A&M Studios for the session.  “Plastic City,” “And Then You Know What He Did,” and “And Then He Walked Through the Door” all remain unreleased to this day.  It’s been reported that at least one of these songs may have been written for a proposed film version of Promises, Promises.  Though none of this trio appears on the WEA Japan reissues, we’re thrilled to confirm that the Bacharach/Russell song “And Then You Know What He Did” will soon appear for the very first time on a new 25-song compilation entitled Dionne Warwick Sings Burt Bacharach.  This disc will be available (at least initially) as an exclusive in conjunction with the PBS special Burt Bacharach’s Best.  The special will be broadcast this June.  Read our review here for more information!  (The three Bacharach/Warwick "reunion" tracks also are included on the Real Gone disc.)