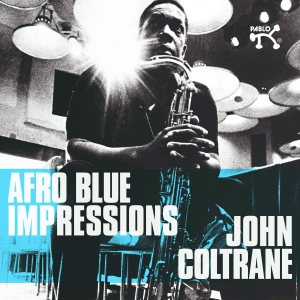 The roots of Coltrane’s great quartet can be traced to 1960.  By fall of that year, Coltrane’s group had coalesced with McCoy Tyner on piano, Elvin Jones on drums, and Steve Davis on bass.  The foursome recorded material released by Atlantic on Coltrane Jazz, Coltrane Plays the Blues, Coltrane’s Sound, and most notably, My Favorite Things.  The title track became a landmark in jazz, with Coltrane on soprano saxophone leading a tour de force modal interpretation of the then-recent Rodgers and Hammerstein Broadway hit.  The transformation from bop to modal jazz (in which solos build from the key rather than from chord changes only) was a key one in Coltrane’s tragically-curtailed career.  By early 1961, Davis had been replaced by Reggie Workman on bass, and the following year saw Jimmy Garrison fill that role.  The classic John Coltrane Quartet line-up (1962-1965) was born.

Tyner, Garrison and Jones would support Coltrane as he experimented with more avant-garde free jazz forms.  The group reached its pinnacle with the 1965 album A Love Supreme.  Its marriage of free jazz and hard bop on yielded one of the most influential, and most successful, jazz albums of all time.  Afro Blue Impressions is imbued with this probing and adventurous style – haunting and creative, yes, but also accessible.  (“My Favorite Things,” in its first Atlantic recording by Coltrane, was even released as a single!)  These performances – with Coltrane on tenor and soprano saxes – pointed the way towards 1964’s dark Crescent as well as A Love Supreme.  The great impresario Norman Granz, founder of Pablo, not only produced the original album but also produced the concerts at which the recordings were made.

On Afro Blue Impressions, Coltrane can be heard on “My Favorite Things,” of course, reinventing Richard Rodgers’ melody (now regarded as a holiday perennial as well as a theatrical standard) in ways the composer surely never imagined.  Though the quartet also found room for Billy Eckstine’s “I Want to Talk About You” and Mongo Santamaria’s “Afro Blue,” most songs were Coltrane originals. These included reinterpretations of music from the classic Giant Steps (“Naima,” “Cousin Mary”), Crescent (“Lonnie’s Lament”), Live at the Village Vanguard (“Chasin’ the Trane,” “Spiritual”) and Impressions (its title track).  Most tracks were recorded in Berlin on November 2, 1963; “Spiritual” and “Impressions” hailed from an October 22, 1963 performance in Stockholm.

What will you find on this new edition?  Hit the jump for full details plus order links!

Concord’s new 2-CD reissue makes room for three bonus tracks not on the original album, all from the same October 22 Stockholm gig: renditions of “My Favorite Things,” “Naima” and “I Want to Talk About You.”  The booklet reprints Benny Green’s original liner notes and adds a present-day assessment from Neil Tesser; Joe Tarantino has newly remastered each track.

John Coltrane would continue to push the envelope of jazz conventions, whether with the continuous 40-minute performance Ascension (1966), Meditations (1966, the final recording with Tyner and Jones) or Expression (1967, Coltrane’s final studio recording).  Posthumous albums quickly became de rigeur as fans and collectors were rightfully eager to obtain as much music as possible from this giant who left too soon.  These recordings from Fall 1963, with Coltrane, Tyner, Jones and Garrison in a period of fast and furious transition and transformation, remain as vital today as they were upon their initial release on LP in 1977.  The deluxe expanded Afro Blue Impressions is available now from Concord Music Group, and can be ordered at the links below!  Five more Pablo Records deluxe reissues follow from the label on September 17.