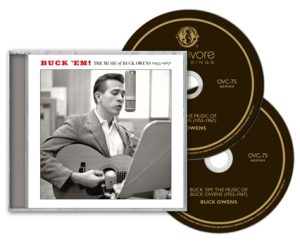 Omnivore Recordings is saying, “Buck, yeah!” to the legacy of the late Mr. Owens.  Though the Bakersfield, California country-and-western legend died in 2006, his autobiography will arrive on November 5 from Backbeat Books and Hal Leonard Books.  Colorfully entitled Buck ‘Em!, it’s co-written with Randy Poe, author of Skydog: The Duane Allman Story.  And Omnivore is at the ready with the perfect soundtrack.  Buck ‘Em! The Music of Buck Owens (1955-1967) hits stores the very same day as the book, for the full Buck reading and listening experience!

What will you find on Buck ‘Em!?  You know what to do.  Just yell Hee-Haw! and hit the jump!

Buck ‘Em! begins with a clutch of Owens’ pre-Capitol sides for Pep Records (“Down on the Corner of Love,” “Hot Dog” and “There Goes My Love”) and continues to chronicle Buck’s story – and indeed, that of the influential Bakersfield Sound – through the demise of the classic Buckaroos lineup of Don Rich, Tom Brumley, Doyle Holly and Willie Cantu.  Buck and an altered group of Buckaroos continued to record, of course, but that’s a tale for another day, and another release.  Curtsinger and Shaw.  (Amazingly, latter-day Buckaroos Doyle Curtsinger and Jim Shaw still perform every Friday and Saturday evening at Owens’ Crystal Palace in Bakersfield!)  The selections here have been drawn from original studio recordings, live versions and rare alternates and unissued material.  All, however, are distinguished by Owens’ singular voice and the tight, twangy accompaniment of his Buckaroos – adding up to equal parts heartbreak and rip-roarin’ joy.

Eleven chart-topping hits by Owens are featured, a number of which are presented in their original mono single versions (“I’ve Got a Tiger by the Tail,” “Love’s Gonna Live Here,” “I Don’t Care (Just As Long As You Love Me),” “Sam’s Place,” and “Before You Go”).  All told, fifteen mono 45 versions of Owens staples are included, such as the holiday perennial “Santa Looked a Lot Like Daddy.”  Live tracks – from New York's Carnegie Hall, Bakersfield, and even Japan - have earned a spot on the collection, too, including renditions of favorites like “Act Naturally,” “Buckaroo” and “Together Again.”  Alternate versions of “My Heart Skips A Beat,” “Where Do The Good Times Go,” and “How Long Will My Baby Be Gone” make their U.S. CD debut, alongside a previously unissued version of “Under The Influence Of Love” and the first CD appearance of Omnivore’s sold-out Record Store Day single “Close Up The Honky Tonks.”

In true Omnivore fashion, Buck ‘Em! includes liner notes, derived from the autobiography, plus session information and rare photographs.  Don’t close up the honky tonks ‘til you get a chance to spin Buck ‘Em! on the jukebox.  It will be waiting for you on November 5 from Omnivore Recordings, and you can pre-order at the links below!  A cold beer in which to cry is optional.