Along Came Jones (And Robbins, Too): Morello Revives Classic Country from George and Marty

George Jones was the first artist to be reissued on the Morello label, and just a few months ago, the two-fer of Jones Country (1983) and You’ve Still Got a Place in My Heart (1984) arrived.

Morello’s exploration of Jones’ latter-day work has now brought the reissue on one CD of two Epic Records albums: he autobiographically-titled Too Wild Too Long (1987) and You Oughta Be Here with Me (1990).  Too Wild built on the success of 1986’s gold album Wine Colored Roses, which was previously paired on CD by Cherry Red’s T-Bird imprint with 1985’s Who’s Gonna Fill Their Shoes.   Too Wild Too Long continued Jones’ long-standing partnership with renowned producer Billy Sherrill, and it yielded three hit Country singles: “I’m a Survivor” (No. 26), “The Bird” (No. 52) and “The Old Man No One Loves” (No. 63).  The album itself placed at a respectable No. 14 on the Billboard Country chart. Jones didn’t pen any material for the album, but he did film a music video for Wyman Asbill’s “The Old Man No One Loves.”

You Oughta Be Here with Me three years later followed the same template.  (One Woman Man, another prime candidate for reissue, came in between.)  The songs were written by a number of familiar names, including Roger Miller (the title song) and Derek and the Dominos’ Bobby Whitlock with Jack “Peaceful Easy Feeling” Tempchin (“Someone That You Used to Know”).  The LP was Jones’ final collaboration with Sherrill, and though it didn’t score any hit singles for Jones, two of its songs actually charted for other artists when “Somebody Paints the Wall” went Top 10 Country for Tracy Lawrence in 1992 and Blake Shelton took “Ol’ Red” to the Top 20 in 2001.

Alan Wilson has remastered both albums, and Michael Heatley has supplied a brief essay.  After the jump, we’ll check out two of Jones’ duets albums, plus a two-for-one CD from Marty Robbins! 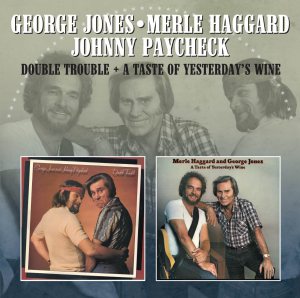 George Jones’ most famous duet partner was no doubt Tammy Wynette, his third wife with whom he experienced a tempestuous relationship that translated into a series of hit recordings.  But The Possum also frequently teamed up with other artists – including Melba Montgomery, Gene Pitney, and even James Taylor.  Morello has paired 1980’s Double Trouble, with Johnny Paycheck, with 1982’s A Taste of Yesterday’s Wine, with Merle Haggard.  Both were produced by Billy Sherrill for Epic.  On Double Trouble, Jones and outlaw hero Paycheck tore into some good-time rock-and-roll.  Here was a chance to hear Jones and Paycheck wrap their unmistakable pipes around songs including Jerry Leiber and Mike Stoller’s “Kansas City” and “Along Came Jones” (naturally!), Chuck Berry’s “Maybellene” and “Roll Over Beethoven,” Little Richard’s “Tutti Frutti,” Arthur Alexander’s “You Better Move On,” and John Fogerty’s “Proud Mary.”  Four singles charted from the LP, the most successful of which was the No. 7 Country take on “Maybellene.”

A Taste of Yesterday’s Wine was named for the title song by Willie Nelson, who shared a place with paycheck and Jones’ duet partner Merle Haggard in the outlaw country movement.  They were rewarded when the song reached No. 1 on the Country chart, propelling the album to a No. 4 berth, as well.  Hag, from Bakersfield, California, proved another simpatico foil for No-Show Jones – and the song of that name actually closed out the album.  Not to be outdone, “Silver Eagle” – about Haggard – was also included.  Haggard’s wife Leona Williams sang backing vocals and also wrote “After I Sing All My Songs,” and Hag’s own “C.C. Waterback” followed “Yesterday’s Wine” up the charts to a No. 10 position.  Haggard and Paycheck co-wrote “I Haven’t Found Her Yet,” and Vern Gosdin contributed “Must’ve Been Drunk.”  Haggard and Jones reteamed years later for 2006’s Kicking Out the Footlights…Again, a true testament to the longevity of these legendary artists. 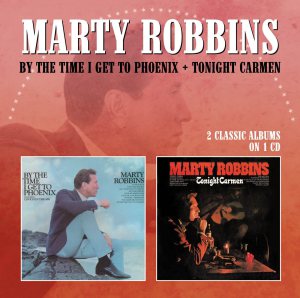 Marty Robbins has been a label favorite, too, since its inception.  Morello’s latest two-fer from the Columbia Records artist brings together two long out-of-print albums from 1967 and 1968, respectively.  1967’s Tonight, Carmen was named after one of Robbins’ own compositions, one of two on the LP (the other is “Is There Anything Left I Can Say”).  The mariachi-flecked tune sets the tone for the album, with its plentiful horns and Spanish-style guitar strumming.  In the original liner notes by producer Bob Johnston (Simon and Garfunkel, Bob Dylan) reprinted in the booklet here, it’s described accurately as consisting of “lusty, lilting and sentimental songs” from the C&W troubadour, gone south of the border.  Johnston and Bill Walker arranged the romantic set, which took Robbins to far-flung locales for “In the Valley of the River Grande,” “The Mission in Guadalajara,” “Bound for Mexico,” and “Waiting in Reno.”  The Latin feel continued with songs like “Spanish Lullaby” and “Don’t Go Away, Señor.”  The former found Robbins crooning quite convincingly in español.

Robbins pulled out all the stops for By the Time I Get to Phoenix, an eclectic, countrypolitan collection drawing on pop tunes past and present.  Johnston and Robbins incorporated backing choirs and orchestration from conductor/arranger Robert Mersey, perhaps best known for his work with Columbia’s Andy Williams.  From the then-contemporary songbook, Robbins brought his relaxed delivery to Jimmy Webb’s title track, Lennon and McCartney’s “Yesterday,” and “Love is Blue,” a No. 1 instrumental hit for Paul Mauriat in 1967.  Robbins, Johnston and Mersey looked back even further for James Monaco and Joseph McCarthy’s “You Made Me Love You” (1913), Herman Hupfeld’s “As Time Goes By” (1931), and Sammy Fain and Lew Brown’s “That Old Feeling” (1937).  Robbins also brought a clutch of his own compositions – “Virginia,” “To Be in Love with Her” and “Love is in the Air,” the latter which sounds a bit like Bobby Russell’s 1968 “Honey” – along with one song co-written with Mersey, “Until We Meet Again.”

Alan Wilson has remastered the Jones and Robbins sets, both of which feature brief liner notes from Michael Heatley.  (Alas, no discographical annotation is provided on any of the three releases.)  All three titles are available now from Morello Records and can be ordered below!