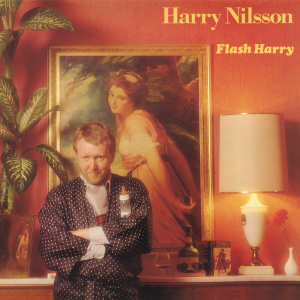 When Harry Nilsson's The RCA Albums Collection was finally unveiled earlier this year by Legacy Recordings, many finally stood up and took notice of the gifted singer-songwriter whose art deftly blended the high and the low, the angelic and the devilish, the euphoric and the melancholy.  That astounding box set included each one of Nilsson's albums for the RCA label - in other words, his entire solo discography save one album.  And now, that final missing link is finally here, on CD to join its brethren.  At long last...Flash Harry!

A series of incidents, ranging from lack of promotion to the label's release of a "greatest hits" collection with a Harry lookalike on its cover (!), led Nilsson to sever his ties with the only record company he ever truly called home.  1977's Knnillssonn turned out to be his final RCA album, but in 1980, it was time to greet the new decade with a new label (Mercury) and a new album: Flash Harry.  Problem was, hardly anybody ever heard it!  Despite a starry array of musicians including Van Dyke Parks, Ringo Starr, Lowell George, Donald "Duck" Dunn, Keith Allison, Dr. John and Klaus Voormann, a name producer (Stax guitar great Steve Cropper) and an eclectic crop of songs, the LP was withheld from release in North America.  Issued only in Europe and Japan, Harry disappeared in, well, a Flash.  It's never been reissued in any format, until now.  Varese Sarabande has rescued Nilsson's studio swansong and reissued it on both vinyl and CD, and it makes a perfect complement - indeed, a necessary one - to the expansive RCA box.

A taut collection of just ten loose songs, Flash Harry has an air of an artist not taking himself too seriously, for good or ill.  Blink and you will have missed it - and given the album's fate, this ephemeral quality is fitting.  Despite Cropper's presence as co-producer (with Cherokee Studios' owner/engineer Bruce Robb), Flash Harry isn't Nilsson's "R&B album."  There are soulful elements for sure - but Nilsson, even at his most vocally diminished, always possessed a soulful tone.  Cropper may have brought that timbre of his voice out on Flash Harry, but moreover, its spirited, anything-goes party vibe both stands in marked contrast to, and as a natural continuation of, RCA farewell Knnillssonn.  That underrated classic brought Nilsson full circle to his ornate, early productions for the label, with the stunning ballad "All I Think About is You" and sweet "Perfect Day" taking spots alongside calypso, rock and theatrical vaudeville excursions.  Flash Harry lacks anything as beautiful or evocative as those two songs or the equally-wonderful "Blanket for a Sail."  But it has the same rollicking stylistic diversity as its predecessor of three years earlier.  By 1980, Nilsson had committed himself to penning musicals for stage and screen, and those projects informed his work on the album, as well.

Flash Harry is bookended by the songs of Nilsson's pal Eric Idle, and one - the opening paean to "Harry" - is even sung by Idle and Charlie Dore.  As Nilsson, circa 1980, is quoted in Jerry McCulley's terrific new liner notes for the CD edition, "The name of the album is Flash Harry, and it's a very 'flash' thing at this stage of my career to say I have people sing for me!"  Idle's tongue is firmly planted in cheek, inviting listeners to "come and share a joke or two/Come and have a smoke or two/You can have some coke...a-cola, too, with Harry!"  Just as delightful is the album's closing, Harry's own rendition of Idle's Life of Brian (and later, Spamalot) showstopper "[Always Look on the] Bright Side of Life."  Nilsson sings the darkly funny tune with clear affection, leading a 25-strong chorus in an inventive arrangement.  As such, it's one of the highlights here.

Two more strong tracks resulted from Nilsson's collaboration with Van Dyke Parks, another friend.  Parks had contributed the Caribbean flourishes to Harry's 1975 Duit on Mon Dei, and Nilsson continued to record in that tropical vein on albums such as ...That's the Way It Is and Knnillssonn.  Here, we get the Parks/Lowell George/Martin Kibbee "Cheek to Cheek," an ode to a lady from south of the border who's got Harry's heart "on permanent loan," and "Best Move," by Parks, Nilsson and Mike Hazlewood of "It Never Rains in Southern California" and "The Air That I Breathe" fame.  (In McCulley's essay, Parks dryly remarks of Kibbee's participation in "Cheek to Cheek" that "if you're in the room when the song is being written, you're in the copyright!")  "Best Move" makes the most of a sweet and infectious melody and a breezy arrangement, though the lyrics are tossed-off and goofy: "Don't forget the Wesson oil and mayonnaise just in case I love you..." or "This could be the best fade you ever played...would you mind undressing while I serenade?"

A reggae groove also spices up "Rain," the lone solo Nilsson composition on Flash Harry.  Tasty guitar licks, atmospheric flute and a backing chorus waft in and out, and the lyrical concept is solid ("All I need is a bit of rain...come and take away my pain") though the song feels a bit underdeveloped.  Nilsson brought along Ringo Starr as co-writer of the reggae-fied romp "How Long Can Disco On."  The title may be the best thing about it, however.  What might have been endearingly silly ("DJ, he play reggae/And I say, do you wanna dance reggae?/She say, Oh no!  Disco!") is hindered by a crawling tempo and lack of energy.  Starr plays drums here.

Ringo's presence isn't the only Fab Four connection on Flash Harry, as Nilsson revisited his John Lennon co-write "Old Dirt Road."  Harry's take doesn't veer too far from the template established on Lennon's Walls and Bridges rendition (on which Harry appeared).  An alternate take - which first appeared on the Perfect Day publishing sampler - has been appended to Varese's CD reissue.  It's a bit shorter and lacks the cooing female backing vocals of the album version.

Nilsson reunited with another old collaborator, arranger Perry Botkin, Jr., on Flash Harry.  Botkin had returned to the fold on Duit on Mon Dei, and penned the 1980 musical Zapata! with Nilsson about the Mexican revolutionary Emiliano Zapata.  From their score comes "I've Got It."  Think Harry as Randy Newman in spoken-sung, talking-blues mode (a la "My Life is Good") and you have an idea of what this loopy, risqué ditty sounds like.  Harry is also less than angelic on "It's So Easy," co-written with Paul Stallworth.  Its R&B style rather overtly evokes "I Heard It Through the Grapevine," with down and dirty guitar piercing through the slithering strings.  Harry name-checks himself and Stallworth on this lyrically slight slab of soul: "How do you feel when you see me/What do you see when you see through me?/It's so good to be in you/Can't stop myself from messin' with you..."

Much more keenly felt is "I Don't Need You."  Rick Christian's heartrending breakup ballad - not the deliciously acerbic Rupert Holmes composition of the same name - became a hit for Kenny Rogers in 1981, but should have had a shot for success in Harry's fine treatment.  Its prominent piano and strings clearly recall the likes of "Without You," and while Harry's voice is much more frayed, it's filled with emotion.

Varese's CD reissue has added four bonus tracks, including the alternate of "Old Dirt Road."  These outtakes aren't in the same pristine quality as the album itself - nicely remastered by Steve Massie - but they are nonetheless invaluable.  Sideman supreme Danny Kortchmar supplies the catchy, uptempo "Feet," with a guttural, raspy vocal from Nilsson.  Allen Toussaint's "Leave the Rest to Molly," previously recorded by Browning Bryant, would have fit snugly on Flash Harry as would have "She Drifted Away."  This John Lawrence Agostino song has the same loping reggae vibe Nilsson favored during this period, with a jazzy saxophone and country guitar licks adding color.  He even ad libs a bit of Randy Newman's "Sail Away" as the song fades.  The 180-gram vinyl reissue lacks the bonus material and McCulley's new notes, but reprints the 1980 back cover liners by Derek Taylor which are otherwise unavailable.  Produced like its CD counterpart by Cary Mansfield with art direction by Bill Pitzonka, the LP is a loving recreation of the original release.

Flash Harry may not have received the same acclaim as, say, Nilsson Schmilsson - you know, that other album with the singer featured in a bathrobe on the front cover photo.  Schmilsson had the feel of raw rock-and-roll despite a high level of polish, whereas Flash Harry never coheres in the manner of Nilsson's greatest albums.  But the lighter charms of Flash Harry ensure that it, too, deserves its place in his discography, and Varese's reissue belongs on your shelf right next to The Complete RCA Albums Collection.  The resonant, quirky, and highly individual voice of Harry Nilsson shines through.  So, come and share a joke or two, come and have a smoke or two, you can have some coke....oh, never mind, just enjoy the pleasures of this very Flash Harry!