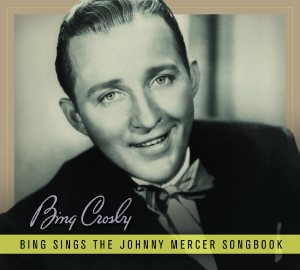 The two latest releases in the Bing Crosby Archive Collection – now distributed by Universal Music – take the legendary crooner around the world, from the American South to the streets of Paris, France.  Bing Crosby Enterprises has just released one new anthology, Bing Sings the Johnny Mercer Songbook, along with a 60th anniversary deluxe expanded reissue of the Decca album Le Bing: Song Hits of Paris.   In the tradition of past Archive Collection releases, these discs are packed with rarities and previously unissued songs from one of the most influential singers of all time.

Savannah, Georgia’s favorite son Johnny Mercer was championed by Bing Crosby from virtually the start of his illustrious career.  Crosby gave Mercer his first major hit in the movies when he sang “I’m an Old Cowhand” in the 1936 film Rhythm on the Range, but even that wasn’t the first time Bing recorded a Mercer composition.  The Johnny Mercer Songbook kicks off with a 1934 radio performance of “P.S. I Love You,” co-written by Mercer and composer-arranger Gordon Jenkins.  It concludes with a 1953 radio take of the same song for which Crosby still evinced great affection.  All told, this new compilation produced by Robert S. Bader includes 22 tracks of prime Mercer sung by one of his biggest admirers between 1934 and 1955.

A full 14 of these recordings are receiving their first-ever release, while the remaining eight tracks first appeared on Decca Records.  Of the previously unreleased material, Bing tackles songs co-written with Harold Arlen (“That Old Black Magic”), Hoagy Carmichael (“Lazy Bones,” sung in duet with Louis Armstrong), Harry Warren (“Jeepers Creepers”), Joseph Kosma (“Autumn Leaves”) and Paul Lincke (“Glow Worm”).  From the Decca catalogue, Crosby brings his relaxed tones to the Arlen co-writes “Ac-Cent-Tchu-Ate The Positive” with the Andrews Sisters and “Blues in the Night” and further standards written with Carmichael (“Skylark”) and Harry Warren (“On the Atchison, Topeka and the Santa Fe,” “You Must Have Been a Beautiful Baby”).  From Mercer’s solo songbook, Crosby sings “Jamboree Jones” (1951) and “Something’s Gotta Give” (1955).  The songwriter himself even duets with Bing on a 1940 Decca single of “Mister Meadowlark.”  Indeed, Bing Sings the Johnny Mercer Songbook could simply be called Bing Sings the Great American Songbook.  Like Crosby himself, Johnny Mercer is still synonymous with American song itself.  Howard E. Green provides new liner notes, and Gene Hobson has remastered all tracks.

After the jump: we have the details on Le Bing, plus full track listings with discographical annotation for both titles and order links!

It’s fair to say that Bing Crosby had a lifelong love affair with France. As Martin McQuade recounts in his new liner notes for Le Bing, Crosby was affected by the experience of entertaining there with the USO, and memorably shot the dramatic film Little Boy Lost in the European country.  Crosby wrote in his 1953 autobiography that “with the exception of my own, France is my favorite country – principally for its people and their individualism.”  It was in France that Crosby discovered his wife Dixie had cancer, and it was in France that he spent some time during a family vacation after her passing.  While in Paris on that trip, Crosby recorded what would become his first-ever original long-playing record.

Le Bing included songs by such renowned French songwriters and artists including Edith Piaf, Jacqueline Francois and Charles Trenet,  but going above and beyond in his quest for authenticity, the quintessentially American Crosby decided to sing the songs in their native tongue.  Composer-conductor Paul Durand, who had recorded with Piaf and Francois, was chosen to collaborate with Crosby, and Crosby’s usual musical director John Scott Trotter was also in attendance.  The resulting album wasn’t only a milestone as Crosby’s first LP, but holds up as one of his most unique.  Among the Trenet songs included is “La Mer,” which Bobby Darin later made famous in the U.S. as “Beyond the Sea.”  Piaf’s immortal “La Vie en Rose” also gets a stylish Crosby treatment.

The deluxe Le Bing adds 15 tracks (12 previously unreleased) to the original eight-song LP, almost tripling its length.  Outtakes and alternate takes have been appended, as well as radio broadcast performances of other Gallic favorites and the English versions of selected tracks which Bing recorded for release on Decca.  Among the radio tracks is a take on Cole Porter’s Can-Can showtune “I Love Paris” and a duet with Jane Morgan on “C’est Si Bon.”  All songs have been remastered for this reissue by Gene Hobson.

Both Bing Sings the Johnny Mercer Songbook and Le Bing are available for order now at the links below!