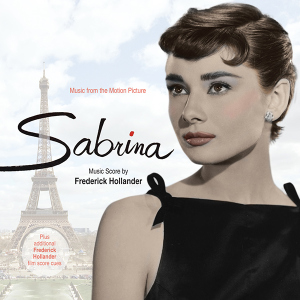 Kritzerland has just jumped headfirst into the holiday season with three exciting releases on the soundtrack front.  Continuing the label's commitment to the Golden Age of Hollywood and beyond, the label has just made these three titles available for pre-order:

Kritzerland indicates that "our hope is that CDs will ship by the last week of December or hopefully even sooner, but this is the busiest time of year for pressing plants, so there is the off chance that it could be early January.  But the hope is to have them out the door before Christmas."  In addition, the label's annual Christmas sale is on!  You can sample the many bargains right here!

After the jump, we have the full contents of Kritzerland's press release, plus track listings and pre-order links! 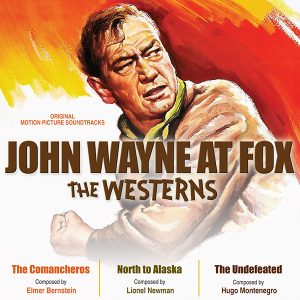 JOHN WAYNE AT FOX - THE WESTERNS

John Wayne at Fox - not a lot of films, but some extraordinarily entertaining ones.

The Comancheros (1961), based on the 1952 novel by Paul I. Wellman, was directed by Michael Curtiz, the great director who'd done any number of classics, including some of the most beloved films of all time - Casablanca, The Adventures of Robin Hood, Captain Blood, Angels With Dirty Faces, The Sea Hawk, Yankee Doodle Dandy, Mildred Pierce, White Christmas, to name just a handful.  Starring were Wayne, Stuart Whitman, Ina Balin, Lee Marvin, Nehemiah Persoff and Bruce Cabot.  It's a wonderful film with colorful performances, gorgeous photography, and a rousing musical score by Elmer Bernstein.  At the time, Bernstein had just written what would become one of the most iconic western scores ever, The Magnificent Seven.  The Comancheros was his follow up western score, and it, like the film it graces, is colorful, bigger than life, and filled with action and adventure.  You know what you're in for as soon as the first chords of the main title music begin, one of Bernstein's all-time classic themes.   But the score is rife with melody and invention and Bernstein's music is as iconic and big as the Duke himself.

A year earlier, the John Wayne Fox western was North to Alaska, a big, sprawling comedy western starring the Duke, Stewart Granger, enticing Capucine, Ernie Kovacs and teen heartthrob Fabian.  The score, credited solely to Lionel Newman, but containing music by several others, fits the film like a glove.   It's got a tuneful title song by Mike Phillips, a nice song for Fabian called "If You Knew" and some fun original orchestral cues by Newman.

Next we jump to the third of the Fox Wayne westerns, the 1969 film The Undefeated, starring Wayne and Rock Hudson, along with Roman Gabriel, Lee Meriwether, Bruce Cabot, Ben Johnson, Jan-Michael Vincent, Harry Carey, Jr., Paul Fix, Richard Mulligan, John Agar and Dub Taylor.  Hugo Montenegro's music for The Undefeated is big as all outdoors, with strong themes and a real sense of storytelling.  As with many Western scores, there's a lot of Copland "Americana" as well as a stirring main theme, some great dramatic scoring, some Mexican-flavored cues and even a hoedown

SABRINA and WE'RE NO ANGELS

Frederick Hollander may not be a familiar name to many film music fans, but he was a superb composer who wrote some terrific scores over the years. He was also a wonderful songwriter, dating back to his work in German cabaret and films - his most iconic and well-known song being the gorgeous "Falling in Love Again" from Josef von Sternberg's The Blue Angel.

The 1954 Billy Wilder film Sabrina was an absolute delight with a brilliant cast.   Humphrey Bogart and William Holden played the brothers Larrabee, Linus and David, and the wonderful British character actor John Williams played their chauffeur, Thomas Fairchild, whose daughter is the title character, Sabrina.  But it was the magical, winsome and altogether lovable Audrey Hepburn who made the film into pure cinematic magic.  She'd become an overnight star the year before with Roman Holiday, and Sabrina was the perfect follow-up, cementing her place as one of the fastest-rising stars in Hollywood.

Wilder wanted to use popular tunes throughout Sabrina, and Hollander was the perfect choice to do those adaptations, as well as provide a few original themes.  The resulting score was a memorable and charming pastiche - in fact, it's impossible to think of Sabrina without hearing Hollander's incredible arrangements of such standards as "My Ideal," "I Don't Want to Walk Without You," "Lover," "Dream Girl," "Isn't It Romantic?" and more.   No one did this kind of score better than Hollander, and Sabrina is pure unadulterated movie scoring magic.

Two years later, Paramount released a wonderful Christmas comedy called We're No Angels, starring Humphrey Bogart, Peter Ustinov and Aldo Ray as the titular angels. Once again, Hollander provides an incredibly appealing score, which has both original and memorable themes along with interpolations such as "Silent Night."

Frederick Hollander had a really long and fruitful tenure at Paramount, and to fill out this CD, we present surviving cues from several of his film scores for the studio, including The Bride Wore Boots, The Affairs of Susan, The Great McGinty, Remember the Night and Disputed Passage.  It is a pleasure to bring an entire album of Hollander music to CD. Though he is perhaps unsung these days, we hope that this potpourri of delightful music will show what an amazing talent he was. 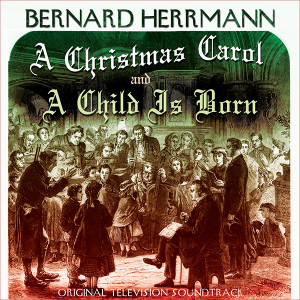 A CHRISTMAS CAROL and A CHILD IS BORN

On a very special evening in 1954, Shower of Stars, an anthology show on CBS, had their very special Christmas special that aired on December 23rd - an adaptation of Charles Dickens' beloved tale, A Christmas Carol, starring Fredric March and Basil Rathbone (as Scrooge and Marley).  It was truly a spectacular - shot on film and broadcast in color - although the majority of viewers saw it in black-and-white, as few people had the ability to watch color back in those days. The adaptation was by Maxwell Anderson, who also wrote the lyrics for the songs, and the score was by film composer Bernard Herrmann.  Weekly Variety called it "superlative TV."  They called Anderson's lyrics "poetic" and his adaptation "stunning."  Best of all, the reviewer called Herrmann's score "majestic."  Herrmann's music is indeed wonderful.  His underscoring is in the classic Herrmann mode, and his songs are quite delightful and infectiously melodic.

One year after A Christmas Carol, Herrmann was back writing another Christmas special, this time for CBS' anthology series, The General Electric Theater, which was hosted future President-to-be, Ronald Reagan.  A Child Is Born was an adaptation of Stephen Vincent Benet's blank-verse play, and featured two stars of the Metropolitan Opera, Nadine Conner and Theodor Uppman, along with the wonderful actor, Victor Jory.  The show was broadcast "live" on December 25, 1955.  This time, Herrmann received over the title billing ("A musical adaptation by Bernard Herrmann of A Child Is Born").  The Herrmann score has beautiful sung passages, and his underscoring, as always, is masterful and typically Herrmannesque.

A Christmas Carol/A Child is Born was previously released by Kritzerland in 2008 and sold out instantly.  We've received a lot of requests to rerelease it over the years.  The two scores were mastered from the best sources available.  No known master tapes survive on either title.  A Child Is Born had a promotional 10-inch record issued, and an excellent copy of it was used for mastering.  A Christmas Carol was mastered from a 15 IPS tape made from what was probably the only surviving set of acetates for the show.  While the sound is archival in nature, mastering engineer James Nelson has done a great job of making it sound as good as it ever will.

You can pre-order all three titles just below!

The Comancheros (Composed and conducted by Elmer Bernstein)

The Undefeated (Composed and conducted by Hugo Montenegro)

Music by Frederick Hollander (except as noted)