Eric Clapton, Give Me Strength: The '74/'75 Recordings (Polydor/UMe)

One of Clapton's most prolific periods is revisited with this six-disc box, featuring expanded versions of 461 Ocean Boulevard (1974), There's One in Every Crowd (1975), a remixed and expanded double-disc version of live album E.C. Was Here (1975), a disc of sessions at Criteria Studios with blues legend Freddie King and a Blu-Ray featuring new 5.1 surround and original quadrophonic mixes.  (Amazon U.S. / Amazon U.K.)

A ten, count 'em, ten-disc overview of one of the greatest jazz vocalists ever. (Amazon U.S. / Amazon U.K.)

Join the fan club! The power-pop cult legends took a stripped-down approach for a 1993 radio tour, and we now get to enjoy these performances for its first official release.

All of Mellencamp's official studio albums for Riva, Mercury, Columbia and Rounder - from 1979's John Cougar to 2010's No Better Than This - plus the out-of-print soundtrack to his 1992 acting and directorial debut, Falling from Grace. (Amazon U.S. / Amazon U.K.) 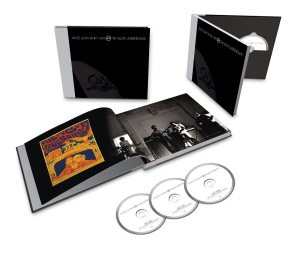 The VU's second album gets the deluxe treatment as a triple-disc set, featuring the album in mono and stereo with 11 bonus tracks, plus a third disc recorded live at New York's Gymnasium in 1967. (A double-disc version omits the mono disc.)

A previously-unreleased disc culled from Young's late-1970 run at the small Washington, D.C. club - the latest in his ongoing Archive Performance Series.

The deluxe version of this new release - from a new Disney film telling the tale of how Walt Disney (Tom Hanks) brought P.L. Travers (Emma Thompson)'s classic children's novels to the screen - contains never-before-released "pre-demos" from the original 1964 film! (In the U.K., those demos are available on a new double-disc reissue of the original Mary Poppins soundtrack.)

The final volume in the long-running box set series features five discs of soul-pop classics from the back end of 1972. (Amazon U.S. / Amazon U.K.)

A new five-disc anthology from one of America's most notable jazz labels. (Amazon U.S. / Amazon U.K.)