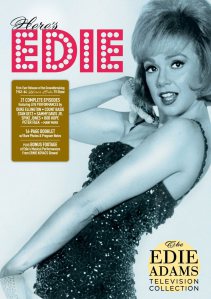 In one of the many testimonials that enhance the booklet to the first-ever DVD release of Here’s Edie: The Edie Adams Television Collection, Carl Reiner may have put it best and most succinctly: “Edie Adams…a combination of beauty, brains and talent…what else do you need?”  Based on the evidence in this thoroughly delightful 4-DVD, 12-hour, 21-episode set now available from MVD Visual (MVD 59200), you don’t need anything else.  Adams just about had it all, and showed it off for the 1962-1964 television variety show.  Here’s Edie aired on Thursday nights, alternating weeks with Sid Caesar’s program on ABC.  It was good company, indeed.

“Variety” was the emphasis of Adams’ sophisticated, unorthodox program.  Though entertainment was the primary objective, the trailblazing Adams also hoped that Here’s Edie would inform its audience.  Nobody stood in her way, not even from the network.  Rare for a female at the time who wasn’t Lucille Ball, Adams was given creative control of her show.  She produced it, owned it, and even designed her own wardrobe!  Jazz, classical and opera artists all got equal time alongside the expected pop stars.  A cursory glance at the guest stars featured on these DVDs reveals appearances by the illustrious likes of Duke Ellington, Andre Previn, Stan Getz, Laurindo Almeida, Charlie Byrd, Lionel Hampton, Nancy Wilson, and Lauritz Melchior, plus Sammy Davis, Jr., Bobby Darin, Johnny Mathis and John Raitt.

The singer-actress-comedienne was as much at home on television as she was on stage and on film.  She had appeared with her husband Ernie Kovacs on a variety of programs since the early days of television, and when Kovacs tragically perished in a car accident in 1962, Adams had no choice but to press forward.  Kovacs’ series Take a Good Look and ABC specials had been sponsored by Dutch Masters cigars; the brand’s parent, Consolidated Cigar, turned to Edie to become the spokeswoman for their Muriel brand.  Muriel sponsored Here’s Edie (renamed The Edie Adams Show in fall 1963) and the star’s association with Muriel would, remarkably, last till the 1990s.  The entertaining, musical Muriel spots are among the highlights of these discs.

We’ll look further after the jump!

The half-hour installments (presented in complete form here), unlike many variety shows, were frequently dedicated to one theme.  Following the pilot episode featuring the odd pairing of Dick Shawn and Andre Previn (variety!), Adams dedicated the October 23, 1962 to New York.  A December show was all about London, filmed on location and bravely including a performance by Sir Michael Redgrave (father of Vanessa and Lynn) of the Saint Crispin’s Day speech from Shakespeare’s Henry V.  It was hardly traditional fare; neither was the January 1963 episode devoted to the young musical genre of bossa nova.  We won’t blame Adams for the bossa nova, but rather we’ll thank her for featuring the spellbinding Brazilian music of saxophonist Stan Getz and guitarist Laurindo Almeida in an episode that also features cameos by Don Rickles (silently hawking Muriel Cigars) and Cesar Romero.

Just as ambitious as the London-set show was one shot at the Riviera in Las Vegas, preserving Adams’ nightclub act.  There’s a thrill in seeing the classic Vegas marquees, from Sinatra, Martin and Davis holding court at the Sands to Betty Grable and Dan Dailey starring in Guys and Dolls at the Dunes.   Bobby Darin, Eddie Fisher and Don Rickles were also appearing, and Cesare Siepi and Joan O’Brien were offering surprisingly deep fare with South Pacific.  The chic, glamorous Adams, backed by a brassy orchestra and dancers, has the audience in the palm of her hands (and the viewers at home) with impressions (Jeanette MacDonald, Ethel Merman, Marlene Dietrich and even Shirley Temple, each with an outrageous costume) and songs like Leiber and Stoller’s “I’m a Woman,” Jobim’s “Desafinado” with special lyrics, and the Jule Styne/Betty Comden/Adolph Green ballad “Make Someone Happy.”  The television program allowed Adams a natural showplace for her gifts of song, comedy and even dance, not to mention the natural charm which made her such a welcoming presence in the living room.

Ever the gracious host, Adams introduces Jerry Vale, Dan Dailey, Eddie Fisher and Sammy Davis, Jr. from the audience.  Fisher comes onstage for a swinging take on South Pacific’s “This Nearly Was Mine,” and joins Adams for a duet of “Let Me Entertain You” from the then-recent musical Gypsy.  Of course, Davis can’t resist briefly getting into the act, either.  Put simply, this is the kind of Vegas entertainment that’s long gone, but thanks to this release, you can have a front-row seat.

Sammy Davis returned in a December 1963 broadcast that also featured the comedy duo of Mitzi McCall and Charlie Brill as well as regulars Don Chastain and Peter Hanley.  The small screen can barely contain Davis (always an underrated jazz singer) at the peak of his prodigious performing talents as he commands the stage for “Stella by Starlight” and “Come Rain or Come Shine.”  Davis also shows off his famous impressions and makes it abundantly clear why he’s still regarded by many as the quintessential all-around entertainer.

Equally clear is how generous Adams was in allowing her guests to shine as brightly as she did.  Bobby Darin is brash and swaggering as Edie’s special guest on a February 1964 broadcast, whether finger-snapping through the ever-popular “This Nearly Was Mine” and gamely joining Edie in a western-themed comedy sketch.  Best of all, though, is a joint segment dedicated to the varied songs of the great composer Kurt Weill (“Mack the Knife,” “Speak Low”).  Darin and Adams’ easy rapport comes through on what Darin calls “great idea songs” from musicals like Lost in the Stars and Lady in the Dark.  Adams even sings part of “Surabaya Johnny” from Happy End in its original German!  It builds into a decadent “dream” production number including that musical’s “The Bilbao Song.”  Adams’ cultural ambitions certainly paid off.  On the final episode in the box set of March 18, 1964, Johnny Mathis is the musical guest.  Adams opens the show with Jerry Herman’s “Hello, Dolly!” from the Broadway musical that just opened two months earlier, and Mathis takes the stage to smoothly croon his then-current Mercury single “Bye Bye Barbara” and the Rodgers and Hart standard “The Most Beautiful Girl in the World.”  A timely skit is a Beatles spoof with Adams and Soupy Sales as members of another Fab Four named…The Roaches.

Comedy featured as prominently as music on Here’s Edie/The Edie Adams Show.  Dan Rowan and Dick Martin, pre-Laugh-In, also made a number of enjoyable comedy appearances with Edie, and one terrific episode gives the late, great Allan Sherman a chance to display his versatility.  Writer-actor George Furth, perhaps best known for penning plays such as Twigs and musicals like Company and Merrily We Roll Along (both with Stephen Sondheim) also appears in a couple of episodes here.

Here’s Edie boasts wonderfully crisp video quality in original black-and-white.  Adams’ son Josh Mills, the producer of this box set, writes in his copious liner notes that “until they were transferred for this release, the masters had been sitting for more than 50 years in a temperature-controlled facility alongside Ernie [Kovacs]’s body of work.”  The presentation is deluxe; Mills’ essay is part of the booklet which also contains a detailed episode guide by Ben Model and numerous photographs.”   In addition, the set includes bonus features like promotional clips and numerous songs from Kovacs’ programs like “’S Wonderful” (1952), “I Could Have Danced All Night” (1956) and another deliciously witty Rodgers and Hart song, “To Keep My Love Alive” (also 1956).

You can order Here’s Edie: The Edie Adams Television Collection at Amazon U.S. and Amazon U.K. !