If You've Got It, Flaunt It: Stage Door Records Brings "Privates on Parade" To CD 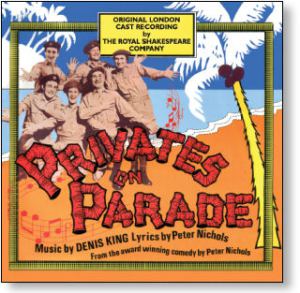 Reviewing The Michael Grandage Company’s 2012 production of Peter Nichols’ play with music Privates on Parade, critic Charles Spencer summed up the feelings of many of his colleagues when he called the production “gloriously entertaining and often deeply touching.”  Nichols’ semi-autobiographical 1977 play drew on his own experiences as a young British serviceman with Combined Services Entertainment, providing song and dance to the country’s Armed Forces.  Now, Stage Door Records is bringing the Original London Cast Recording of Privates on Parade to CD in a newly-remastered edition due on January 27.

Set in Singapore and Malaysia circa 1948 during the Malayan Emergency, Nichols’ play focused on the fictional Song and Dance Unit South East Asia, or S.A.D.U.S.E.A.  As the double-entendre of a title indicated, the play promised privates of both the army variety and perhaps the other variety.  Composer Denis King joined playwright/lyricist Nichols to bring his bawdy, farcical - yet surprisingly dark and biting - satire to life.  The Royal Shakespeare Company premiered Privates on Parade at Stratford-upon-Avon before successfully transferring the show to the West End’s Aldwych Theatre in February 1977, today the home of Andrew Lloyd Webber’s new musical Stephen Ward.  The London production directed by Michael Blakemore and starring stage and screen veterans Denis Quilley and Nigel Hawthorne, ran for 207 performances.

There’s more after the jump, including pre-order links and the track listing!

Privates garnered numerous trophies including the Olivier Award for Best New Comedy and the Ivor Novello Award for Best Musical.  It also earned Oliviers for Quilley (Comedy Performance of the Year) and Hawthorne (Actor of the Year in a Supporting Role) with Blakemore recognized with a Best Director nomination.  Before shuttering in London, it made the jump to the Piccadilly Theatre; its American premiere came in 1979 at New Haven, Connecticut’s Long Wharf Theatre.  Since then, the play has been revived numerous times, most recently in Grandage’s 2012 production.  George Harrison was among Privates’ most famous fans; the Beatle’s Handmade Films produced the 1982 film version in which Quilley reprised his stage role as the flamboyant, cross-dressing Captain Terri Dennis opposite the newly-cast John Cleese of Monty Python fame.  Joe Melia and Simon Jones from the stage cast also appeared in the big-screen adaptation directed by Blakemore.

The Original London Cast Album, produced by King, was recorded in January 1978 at Essex Studios and originally released on the EMI label.  The album preserved King and Nichols’ score, filled with stinging pastiches of the music of Fred Astaire and Ginger Rogers, Marlene Dietrich, Noel Coward and Carmen Miranda.   For its CD debut, Stage Door has licensed Privates on Parade from Bucks Music and the recording has been fully remastered from the original master tapes.

Privates on Parade is set for release on January 27 from Stage Door Records.  You can hear samples at Stage Door’s website, and the CD can be pre-ordered at the links below!