There's No Place Like Oz: Sepia Celebrates 75th Anniversary of "The Wizard of Oz" With New Rarities Anthology 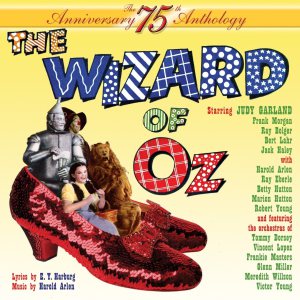 When L. Frank Baum published his novel The Wonderful Wizard of Oz at the turn of the century in 1900, could the author have ever possibly imagined that his characters would still be known by virtually every man, woman and child some 114 years later?  Much of that success, however, is attributable to MGM's lavish, Oscar-winning 1939 musical film adaptation which immortalized Judy Garland as Dorothy along with Ray Bolger, Jack Haley and Bert Lahr as, respectively, The Scarecrow, The Tin Man and The Cowardly Lion.  Thanks to the success of MGM's The Wizard of Oz - which solidified its place in American culture largely thanks to annual television airings beginning in 1956 - "There's no place like home" and "Toto, I've a feeling we're not in Kansas anymore" have entered the lexicon.  The film introduced the world to Harold Arlen and E.Y. Harburg's "Over the Rainbow," voted the 20th Century's Best Song  by the Recording Industry Association of America and the National Endowment for the Arts, in front of "White Christmas," "This Land is Your Land," "Respect" and "American Pie."  It also set the stage (pun intended) for further adaptations based on the original source material such as the Broadway blockbuster Wicked, itself based on Gregory Maguire's Oz spin-off novel of the same name.  Now, U.K. label Sepia Recordings is celebrating the film's 75th anniversary (already recognized by current rights-holder Warner Bros. with a 3-D Blu-ray presentation and lavish new box set) with an unusual anthology that should pique the interest of Ozians everywhere.

The Wizard of Oz: 75th Anniversary Anthology brings together songs from the film in rare and little-heard versions recorded by its stars such as Judy Garland, composer Harold Arlen and popular performers including Glenn Miller and His Orchestra.  Live radio broadcasts to promote the movie are heavily drawn upon, and devotees will find four recordings of "Over the Rainbow" performed by Garland: the original movie version, a live performance, a "pop" version and finally, one with the Tommy Dorsey Orchestra recorded to sell government war bonds. Big bands are represented here by Miller as well as Vincent Lopez and Frankie Masters, each performing their "dance band" version of songs from the Arlen/Harburg score.  This disc, basically a collection of "bonus tracks," makes a fine complement to Rhino/Turner Classic Movies' definitive 1995 soundtrack restoration and other associated releases such as 1998's The Story and Songs of the Wizard of Oz.

After the jump, we have more details including the complete track listing!

Sepia, which has dealt frequently in public domain recordings such as those featured on The Wizard of Oz, releases its Oz compendium alongside other P.D. titles by Sauter-Finegan and Their Orchestra (The Return of the Doodletown Fifers/Pop Concert), teen queen Connie Francis (The International Connie Francis: Connie Sings in Nine Languages!) and composer Morton Gould (the original soundtrack to 1955's Cinerama Holiday).  The Wizard of Oz: 75th Anniversary Anthology is due in the U.K. on February 4 alongside these other Sepia releases; all titles will be available on Amazon U.S. as of February 11.  You can pre-order below!