"Drums Along the Hudson" Beat Again with Reissue of Expanded Album 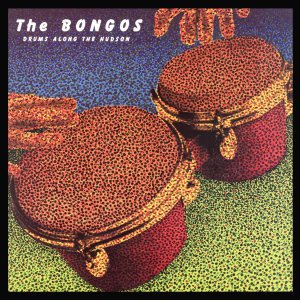 When Jem Recordings - the famous import distributor (located in the author's hometown!) - was reborn last year, at its front and center was The Bongos, the incredible Hoboken-bred pop-rock band who were the first and last act to play the town's legendary venue Maxwell's when it closed last year. Jem issued on CD an unreleased Bongos album, Phantom Train, as well as a physical release for frontman Richard Barone's superb Cool Blue Halo 25th Anniversary Concert. Last week, Jem added another Bongos treasure to their catalogue: an expanded edition of Drums Along the Hudson, the band's first LP from 1982.

Originally released on Jem's PVC label, Drums Along the Hudson was The Bongos' breakthrough to audiences and critics beyond the Tri-State area. In a retrospective review for The Chicago Sun-Times, Jim DeRogatis wrote, "The initial impression of naivete is offset by deceptively simple lyrics that actually hint at deep, dark mysteries and unfathomed mystical enigmas." A cover of T. Rex's "Mambo Sun" peaked at No. 22 on the Billboard dance charts, and the band gained enough momentum to sign with RCA Records for two releases, 1983's Numbers with Wings EP (the title video of which was an early MTV hit) and 1985's Beat Hotel. (Phantom Hotel would follow, albeit unreleased until last year.)

Drums Along the Hudson was reissued by Cooking Vinyl in 2007 with a host of extras: an unreleased studio song, "Nuts & Bolts," excerpts from two live shows in New Jersey and London in 1979 and 1981 and what was the band's first newly released recording in over 20 years: a revisiting of signature track "The Bulrushes" produced by iconic dance artist and Bongos fan Moby.

If you missed out on Drums Along the Hudson either in 1982 or 2007, make now the time to catch up. It's available now at the Amazon links after the jump!

Tracks 1-15 first released as PVC Records 8909, 1982. All other tracks exclusive to this presentation.