Following the release of 1981’s Living Eyes, The Bee Gees effectively called it a day.  The band reportedly clashed during the making of the album, and its lack of chart success convinced Barry, Robin and Maurice Gibb to pursue non-band projects for a time.  Solo albums and soundtrack recordings arrived, and the Barry Gibb/Karl Richardson/Albhy Galuten team worked its magic on releases by Dionne Warwick, Kenny Rogers and Diana Ross (featuring numerous songs co-written by all three brothers, of course).  But a new Bee Gees album didn’t arrive until 1987.  When it did, it was the group’s first ever release for Warner Bros. Records.  That “comeback” album, E.S.P., yielded the U.K. chart-topper “You Win Again.”  E.S.P. leads off The Warner Bros. Years, a new 5-CD box set due on April 15 chronicling the band’s three albums for the Warner label...and more!  The Warner Bros. Years includes the entirety of E.S.P. (1987), One (1989) and High Civilization (1991), and adds demos, single edits and remixes, as well as the world premiere of a 2-CD live album, One for All.

“You Win Again” was a worldwide smash virtually everywhere other than in the United States.  The single, which announced a modernized sound for The Bee Gees, went straight to pole position in Great Britain, Ireland, Switzerland, Germany, Austria, Denmark and Norway, and reached the Top 10 in Italy, the Netherlands, Australia and Sweden. When it reached No. 1 in October 1987 in the U.K., it made The Bee Gees the first group to reach No. 1 in three consecutive decades.   E.S.P. reunited Barry, Robin and Maurice with producer Arif Mardin, the R&B legend who helmed their seventies classics Mr. Natural and Main Course (including the U.S. No. 1 single “Jive Talkin’”).  The album itself went Top 5 in the U.K. and cracked the Top 100 of the Billboard 200 stateside.  The box set’s remastered edition of the album includes five bonus tracks: the demo, single edit and extended version of the title track, plus the single edit of “Angela” and the extended version of “You Win Again.”  (Other remixes of “E.S.P.” from producer Arthur Baker have not made the cut.)

The Bee Gees returned two years later with One (1989). Co-produced by the band and Brian Tench, it was group’s first digital recording.  And it finally rewarded Barry, Robin and Maurice with another U.S. Top 10 hit in its title track.  But the success of One was bittersweet.  While recording the album, brother Andy Gibb died unexpectedly.  Following a break in recording, Andy’s brothers returned to the studio with “Wish You Were Here” and dedicated the album to him. The original U.S. release of One had a different track listing than its international counterpart, switching "Ordinary Lives" and "One" in the running order, and dropping CD bonus track "Wing and a Prayer” in favor of another appearance of "You Win Again" from E.S.P.   (For those who hadn’t yet switched to CD, “Wing and a Prayer” was the vinyl single B-side of “One.”)  The version in the box set restores the original, preferred international sequence, and adds four bonus tracks.  Lead single “One” is included in its edited remix as well as 12-inch Dance and Club Mix versions.  (The dub version is not present.)  The fourth extra is “Shape of Things to Come,” which originally appeared on 1988 Summer Olympics Album: One Moment In Time.

After the jump: more on this new box set including the complete track listing and discography!

The next Bee Gees studio album followed the four-CD box set Tales of the Brothers Gibb which arrived from Polydor in 1990 with unreleased material and remarkable, brand-new stereo mixes from Bill Inglot.  The next year’s High Civilization ended the group’s Warner contract.  With its heavily electronic sound, it announced that the Bee Gees were making no concessions to their past but still staying contemporary.  It also took advantage of the CD format, lasting over 60 minutes for eleven songs.  Lead single “Secret Love” reached the Top 5 in Britain and No. 2 in Germany, but wasn’t even issued in the United States; its B-side “True Confessions” appeared as the CD bonus track on the album.  It’s, of course, included on the edition in this new box set.  No bonus material has been added to High Civilization; the second single “When He’s Gone” added a live B-side of “Massachusetts” which is included elsewhere on the box.  A Dutch promo single had an edited version of “When He’s Gone” and the U.S. single of the song also edited it down by over one minute.  The third single “The Only Love” reached No. 31 in Germany but did not chart in America or Britain.  It was backed by a live “You Win Again” which is also present in the box.  In the U.S., Warner Bros. issued a cassette single of “Happy Ever After” with two edited versions of the song, but neither of those edits are included on The Warner Bros. Years.

The live versions of “Massachusetts” and “You Win Again” can be heard on what will be, for many, the highlight of this new box.  Discs Four and Five are dedicated to the first-time CD release of One for All.  In 1991, the Bee Gees released a concert video of that name, recorded in 1989 in Melbourne, Australia on  the last stop on the group’s One For All World Tour.  During the concert, they touched on every era of their career from early Australian recording “Spicks and Specks” to the disco hits “Stayin’ Alive” and “Nights on Broadway” as well as more recent material like “You Win Again.”  The Bee Gees even touched on the songs penned for other artists like “Heartbreaker” and “Islands in the Stream.”  Over the years, some of these performances have been released on various collections, but The Warner Bros. Years marks the first time that audio of the entire concert will be available.

The release of the box set builds anticipation to the U.S. leg of Barry Gibb’s Mythology Tour, which will make stops in Boston, Philadelphia, Jones Beach, NY, Chicago, Concord, CA, and Los Angeles.  For the tour, Barry will be joined by his son Stephen and his niece, Maurice’s daughter Samantha Gibb.  The Warner Bros. Years arrives from Warner Bros. Records on April 15.  A pre-order link is active below for Amazon U.S.; we will update with a U.K. link as soon as one becomes available! 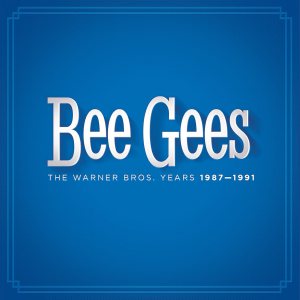 All tracks previously unreleased on CDs 4 and 5