BBR Has “The Force” With Latest Kool and the Gang Remasters 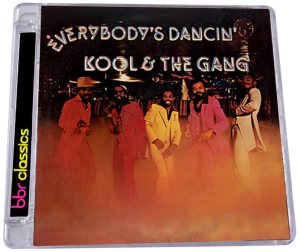 Big Break Records is determined to make sure that Everybody’s Dancin’ with its latest two reissues from the kings of Kool.  The Cherry Red label dived into the Kool and the Gang catalogue in late 2013 with deluxe, expanded editions of all four of the band’s epochal albums with arranger-producer Eumir Deodato: Ladies’ Night (1979, Platinum), Celebrate! (1980, Platinum), Something Special (1981, Platinum) and As One (1982, Gold).  Prior to that, BBR had already given similarly lavish treatment to 1976’s Open Sesame.  With a new pair of releases, the label has filled in the gap between Open Sesame and Ladies’ Night.  1977’s The Force and 1978’s Everybody’s Dancin’ are today best remembered as the albums that set the stage for the sensational Ladies’ Night, but these new reissues make a case to appreciate them on their own considerable merits.

Formed in New Jersey as The Jazziacs, Kool and the Gang signed with Gene Redd’s De-Lite Records in 1969, scoring a hit single right away with an eponymous instrumental single.  With that No. 59 Pop/No. 19 R&B chart entry, Kool established its signature blend of soul, pop and jazz.  As the band continued to grow and explore new musical avenues, they scored a gold record in 1974 with Wild and Peaceful (“Funky Stuff,” “Jungle Boogie,” “Hollywood Swinging”) and in 1975 with the Grammy-nominated Light of Worlds.  Another breakthrough came via Open Sesame when its title song appeared on the colossally successful soundtrack to Saturday Night Fever.  But that album became the final chapter of the first era of Kool and the Gang.

Robert “Kool” Bell (bass/vocals), Ronald Bell (tenor saxophone/keyboards/vocals), Dennis “D.T.” Thomas (alto saxophone/vocals), George “Funky” Brown (drums/vocals), Charles Smith (guitar) and Robert “Spike” Mickens (trumpet/vocals) were joined at Philadelphia’s De-Lite Studios by Claydes Smith (guitars/percussion/vocals), Otha Nash (vocals/percussion/trombone/tuba), Donal Boyce (vocals), Arthur Capehart (trumpet) and Kevin Lassiter (keyboards/clavinet/percussion/vocals) for late 1977’s The Force.  On the album’s eight tracks, Kool and the Gang stayed in R&B fusion jazz vein with which their fans were familiar, layering on enough funk to attract the disco revelers with tracks like the Top 20 R&B hit “Slick Superchick.”  In another concession to the times, “A Place in Space” touched on the public’s fascination with sci-fi, but things were more down to earth on the anthem of self-empowerment “Mighty Mighty High.”  Ronald Bell, Claydes Smith and George Brown’s production kept the album’s style slick yet compelling, and for extra sweetening, the MFSB string section even appeared, on loan from Philadelphia International Records.

Kool and the Gang were rewarded with a No. 33 success for The Force on the U.S. R&B chart.  Big Break’s reissue, remastered by Kevin Reeves, adds the single versions of “Slick Superchick” and “A Place in Space” as well as the 12-inch disco mix of “Mighty Mighty High.”  Steven E. Flemming, Jr.’s new liner notes compellingly chronicle both the band’s history and the story behind the album itself.

After the jump, Everybody’s Dancin’!

Producers Ronald Bell and Dennis Thomas returned to Philadelphia to craft Kool and the Gang’s 1978 follow-up, Everybody’s Dancin’.   As the cover photo and the album’s name indicated, this would be a more disco-oriented album than its predecessor.  In case there was any doubt, this disco party ethos was reflected in song titles such as “Dancin’ Shoes,” “At the Party,” “Stay Awhile,” “You Deserve a Break Today” and “Big Chief Funkum.”  The title track, too, was a majestic dance opus, retaining the band’s trademark big horn sound but surrounding it with pillowy strings and tight keyboard work.  Ballads weren’t entirely absent from the line-up, and nor were Kool’s messages of belief in oneself (“It’s All You Need”) and peace for all (“Peace to the Universe”).  The musicianship was impeccable as ever, with the band sinking their teeth into horn arrangements by Ronald Bell, Charles Jay and Robert Bell, and string and horn charts by John E. Blake, Jr.  But the album failed to crack the Billboard 200, and only reached No. 71 R&B.  Ironically, it took another jazz stalwart – Eumir Deodato – to apply just the right amount of commercial gloss to send Kool and the Gang into the stratosphere.  That happened with the band’s very next album, but Everybody’s Dancin’ still serves as a sweet and seductive coda to one decade of De-Lite-ful soul-jazz.

Big Break’s reissue adds three bonus tracks, all single versions: “I Like Music” and its B-side “It’s All You Need,” plus “Everybody’s Dancin’.”  Flemming returns for the new liner notes, as does Kevin Reeves as remastering engineer.  Both The Force and Everybody’s Dancin’ are housed in Super Jewel Boxes with all original album artwork, and both titles are available for order now at the links below from Big Break Records. 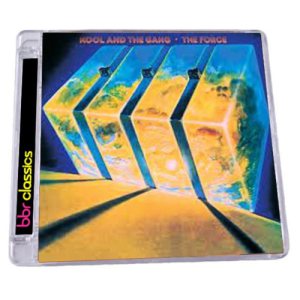